↓ Skip to Main Content
Home › Arts And Science › Health › But First, This: 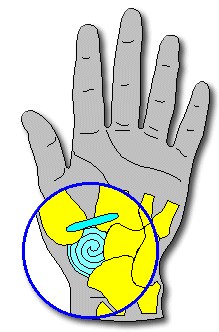 One of Mr. Murphy’s Infallible Laws states: “No matter what you want to do, you have to do something else first.”

And what I gotta do first, before I can get back to life as we know it (maybe by July) is this: My left trapezium–a bone at the base of the thumb–will be surgically removed (we part with bones so rarely) and a perfectly good wrist tendon “harvested” from the same forearm (the blue in the diagram.) That length of sinew will be coiled up inside the empty space where the arthritis-wasted trapezium used to be (the cartilage vanished years ago. Ouch!) and keep the pain-receptor-bearing bones apart. And some other new architecture will happen in there; you really don’t want to hear about. And I don’t want particularly to think about, but…

I saw the orthopedist yesterday, And the *LRTI surgery is scheduled for March 15. I had underestimatedÂ  the time I will be, for all functional purposes like dressing, typing, and photography, one-handed, thinking I would be in a castÂ  for a week, then a splint.Â  It sounds more like six weeks in the cast, hopefully a bivalve number that velcro straps hold together–or release, for showers, etc. He told me that the first week I would be on pain medications pretty much constantly, so I blocking that one out to pretty much be home bound and out of it. But I can drive as soon as I no longer need the meds. The manual transmission of both our cars will make that more fun.

I have three speaking events plus Earth Day already on the calendar for April. The first of those is on April 7 at the Christiansburg Library–3 weeks post-op. I’mÂ  seeing that now as a bigger challenge than I had appreciated, but we will just have to take it one fumbling, awkward day at a time.

I’m trying to make myself use the dictation softwareÂ  as I’m doing now, since if I do any e-mailing or blogging for those weeks in the cast, that will have to be by way of dictation. This will take no small readjustment to the flow of mental to visible words.

I know all of you are immensely interested in the nature of the surgery, soÂ  here’s a link to the surgery description with cartoon pictures——vague enough so that it should not make you feel uncomfortable; I’ll be in charge of that happiness in a month.

This will be a predictable, survivable, temporary disruption of life as we know it inside one household and one pair of hands, one temporary breakdown in the efficiencies of bilateral symmetry that can be an opportunity. I just have to learn to see it that way, even while I will be dependent on my wife to put on my socks. And just for giggles: the right one, the Main Man, is gonna need this too. The Golden Years: they ain’t fer sissies.