↓ Skip to Main Content
Home › Arts And Science › Health › Face Value: Paying for My Time in the Sun

Face Value: Paying for My Time in the Sun 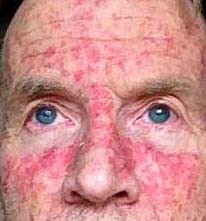 I’m doin’ the time. I’ve been facing this sentence, no pun intended, since my dermatologist appointment in August.

But there has never been a two month break where being a freak of nature could be a private experience. There still hasn’t been, but summer is coming up again, and this price had to be paid before gardening season arrives.

So I’m a public freak. I apologize about scaring little children. I’ll be speaking to a class of 10 to 12 year olds today, as a matter of fact, and they’ve been warned.

My guess is that you or someone you know has experienced this treatment for actinic keratoses and basal cell pre-cancers. Millions do every year. You just don’t often see them out in real life, so called. And now you know why.

I am entering what I understand is the final and worst week in a 3-week daily regimen of application of 5-fluorouracil. Add puffiness to the angry red blotches, and more flaking and crusting, stinging and itching. Throw in some guacamole and a marguerite and you’ve got yourself a good time! And they say the young have all the fun.

Life goes on. Gasp, and get over it. It’s not contagious. Yes, it feels to some degree as bad as it looks. But every angry flaming spot is a cancer that won’t happen.

And yes, I’ve gotten beyond the horrifying memory of the older peer-inflicted childhood trauma of being told not to make hideous faces because…

3 Comments on “Face Value: Paying for My Time in the Sun”