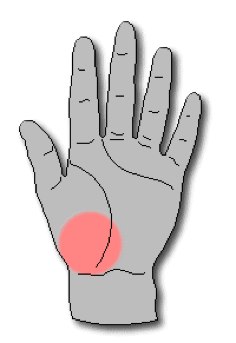 Just for the record: I am now officially glad I had surgery on my thumb.

My first symptoms were in 2001. The problem persisted and worsened, so that for a couple of years now, I’ve been slipping button-up shirts over my head pre-buttonted and buying slip-on shoes to avoid tying laces. Gardening had become more pain than pleasure. I experienced intense (but brief) pain at rest, pain at night, and progressive weakness secondary to disuse because of pain–a vicious cycle of disability and whining.

On April 1, I had the LRTI surgery–ligament reconstruction tendon interposition for basal joint arthritis. A wrist bone (trapezium) was removed, and a forearm tendon (flexor carpi radialis) was used to create a new “joint” and to stabilize the thumb bone of the hand (first metacarpal.)

To my great surprise, I suffered no post-surgical pain at all. A fiberglass cast replaced the surgical dressing on April 11 and it came off May 9. Then the real fun began, with, as I expected, more weakness and loss of motion related to a month of immobilization than to the effects of the surgery. The hand was pretty much a useless appendage those first couple of weeks out of the cast. There was some pain, but it was not the sickening, bone-on-bone pain like I’ve had.

I now have very little pain at all, and almost 100% normal range of motion in my wrist. But I’ll never be able to hitch-hike with my left thumb again (lost the ability to “back-bend” the thumb) but I’ll just show my pretty legs. My left forearm is still the 98 pound weakling on the beach, but it’s gonna kick sand in yer face one of these days, dude.

Without thinking, I find myself doing things with my thumb that I’ve avoided for years. The threat of pain no longer has me mitten-handed for daily activities for which a thumb is just the right tool. I’m back in the game! Gardening is not torture. Maybe, someday, I’ll pick up the guitar again?

Knowledge of this course of recovery is a great thing to have, because the right hand knows its time is coming. And when it does, we’ll know just what to expect, and expectations will be high!

BTW, I attribute a good bit of recent improvement to the regular use of Theraputty–which I would have had weeks earlier if a local PT clinic had sold me a small amount. They refused, stating their supplies were only for patients. As a former clinic manager, I consider this a poor decision for PR in a small, word-of-mouth community. But that’s just me.