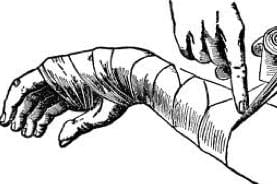 this is only the fifth day of confinement——less than a week of house arrest for my left hand and wrist, and I would just as well be done with it.

It’s not painful. It’s not bloody. It’s just a bloody nuisance, and sometimes without thinking I reached down as if I’m going to just take the darn thing off. It is confining and limiting, andÂ  I hate that itch down under there in places I should not stickÂ  the handleÂ Â  of a serving spoon. The temptation is great, but there are sutures down in there somewhere.

The hazards and pitfalls are beginning to show up.

This morning, I reached for the wood stove door to close it, only a day after it was painted by the chimney sweep. I used my bandaged hand, which nowÂ  is adorned with an unattractive, sooty blotch at the base of my index finger where the paint soaked into theÂ  Ace wrap.

And earlier this morning, I managed to zip up my shirt tail in my pants zipper. It would’ve made an entertaining YouTube home video to watch me Houdini out of the two garments stuck together as one.

Another day, another challenge and opportunity for ADL problem-solving. I coached countless patients through the process of working around their usually temporary disabilities to lead more or less normal lives.

Now I’m trying to practice what I have preached.Â  More or less.