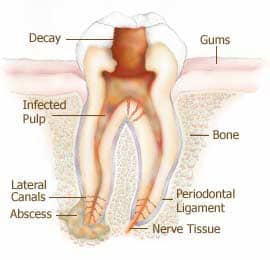 Okay. The title is sensational and overblown. We’re really talking about the roots of some minor personal discomfort is all. But it was my pain.

And when you hurt, it can seem like the universe of all that is sinister and foul is being poured into a cosmic funnel that ends up in your life–even if it is only one dying tooth in one human head. It’s your tooth, your personal and ever-present head, your life, and it becomes THE story of the day or week or however long it lasts until it’s run its course.

Mine ended yesterday, and a clichÃ© has now dropped from my limited vocabulary: the sarcastic phrase “as much fun as a root canal.” My dental evil, at least, while it was not enjoyable, was not awful, and I was in no pain at all during or immediately after the hour with my mouth propped open like the hood of a car.

For diversion, I was handed the remote to the TV mounted in the corner of the ceiling, which, once the dental work started, could only be seen fleetingly under the dentist’s left armpit. The most soothing thing I could find to watch was the Australian Tennis Open. I muted the TV and pulled up the William Coulter channel on my Droid in my shirt pocket. I was thankful for the calming power of music, always there whenever the scream of tiny, shrill tools abated. (Listen to William Coulter and Friends at Grooveshark.)

The Novocain wore off about 8 last night, and I knew I wouldn’t sleep unless I did drugs. I don’t do drugs. To have a pharmacist in the house, we have a minimal number of prescription medications in our cabinet, and most of that is long out of date and culled regularly.

The endodontist prescribed Lortab. I gave in to the pain and took one about 8:30. The tooth stopped hurting, but about 9:15 I broke out into a cold sweat and wasn’t sure I’d be able to get up from my chair. I was 20 minutes from the end of a movie (Frankie and Johnny–Al Pacino and Michelle Pfiffer) and had to shut down the computer and stumble into bed. That one Lortab last night will do me for this brief bout of therapeutically-induced pain, the rest of the bottle will likely go stale before we need another one. Here’s hoping.

Point of all this is: if you have a root canal in your future, don’t get too anxious about it. Mine, at least, was not a big deal. So just think of it as getting a cavity repaired, only some other stuff goes on underneath the local anesthesia that you don’t really wanna know about. Just pay the man and be thankful.

4 thoughts on “Root of All Evil”