The HIV of Bananas 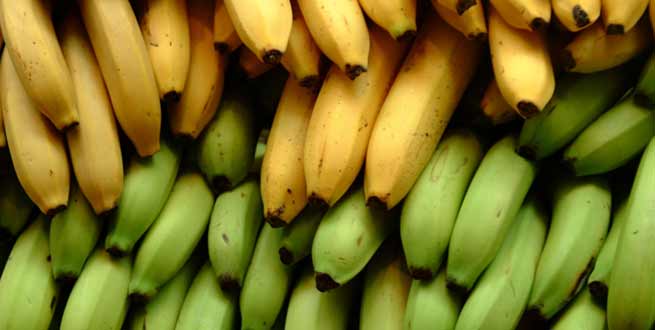 We’d miss them–even as we complain all winter about having nothing but bananas to go on our morning cereal.

But much of the world’s population relies on bananas for more than a supplement to bran flakes in the morning. Millions depend on them as a food source or for a major part of their farming income. And that source is facing the greatest pathogen it has ever encountered.

The killer blight, a fungus, is called Tropical Race 4.Â  (My post here is a rough summary of this long and informative piece over at Quartz.)

What makes it of such concern is that 1) it is moving (albeit slowly now) across the planet, eventually reaching South America where almost all of our breakfast variety comes from;Â  2) it does not just affect the common yellow Cavendish variety that has outsmarted previous devastating forms of Tropical Race virus;Â  and 3) It kills all varieties and there are no sprays or other treatments to use against Race 4.

Lest we see this is an “all about me” problem, the vast majority of bananas that ripen every year do not end up in export but in use for local consumption.Â  Nutrition in already-impoverished diets takes a further dive towards malnutrition or starvation.

The Cavendish predecessor as Top Banana was the Gros Michel. “Big Mike” was a hard stubby variety whose flavor purportedly made today’s fare tasteless and uninteresting by comparison. More than a century ago, that variety was wiped out by Tropical Race #1–a distant relative of today’s more highly-lethal highly-evolved fungus.

Yes, we have no bananas. The 1920s song apparently referred to the demise of Big Mike almost a hundred years ago.

Since then, the evil twins of genetic uniformity and vast monoculture production Big-Ag methods have played into the hands (so to speak) of Race 4.

When the Cavendish goes–as seems ultimately inevitable–it is likely to have the economic impact of the Irish Potato Famine–another cultural and economic fungal disaster that changed the cultural landscape and future for millions. The tropical farmers whose lives will be devastated, however, are not likely to migrate with their families to the promised land and start over again.

So will we be hearing about GMO zipper-fruit in the decades ahead–if banana pathology even makes it into the lineup of agricultural threats already in the queue? There are far more dire risks to tomorrow’s foods and diets.

And maybe after all, there are better uses of the millions of acres of rainforest cleared for Chiquita’s rank and file plantations. In the long run, the world might be better off to get the rainforest back to do what it can do as a reservoir for biodiversity lost to the cause of production and profit.

Bottom line is, we need to maximize for diversity, resiliency and local rather than global production of the food we eat.

[su_highlight background=”#bce5eb”]Given that the nearest banana grows 2500 miles from my breakfast table, should we be thinking about other alternatives to the brown-speckled cereal fruit of winter?[/su_highlight]

2 Comments on “The HIV of Bananas”