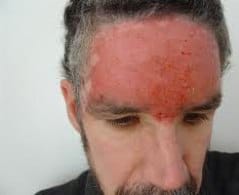 It was a tough call. Would I rather have had two lumpish hags working over every square inch of my hospital-gowned self at the dermatology exam or the two svelte foxy blondes–the LNP and an intern from Carolina–that ganged up on me yesterday. I guess I’m happy for the blondes. But it was a bit awkward. The pain of the biopsy of a spot on my neck went a long way to douse the fantasies.

The pharmacy gal had to check with the pharmacist to make sure the price was correct. Without our drug card, it would have been over $400. Of course, no meds are that precise, and the list of side-effects is not short. I doubt anyone among my dozen readers has had experience with fluorouracil (Efudex.) I’m thinking I’ll call a physician friend to see what he thinks about benefits vs risks.

The other thing is, she warned me it might cause considerable inflammation for the three weeks I have to use it. I imagine my face resembling a boiled shrimp, and am trying to figure when that horror show fits my calendar. Oy. Maybe when I have the surgery on my wrist in October. Just get all the miseries over at once?

Still, reading the account of the fellow in the image above, it gives one pause–somewhere between the devil and the deep blue sea.