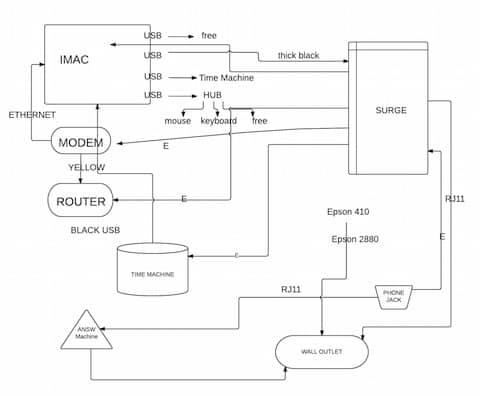 This time six years ago, I was dreading the consequences of the choice I made to never go to Dell again–in a hatbox or otherwise. I was fed up with the PC blue screen and had heard that Mac JUST WORKS. I wanted me some of that. And got it, mostly, since making the switch with the arrival in late January 2008 of the MacPro. I have said good-bye to the old gal now, and gone soon to another.

The old system is still operating fine, inasmuch as any piece of technology is reliable in relative terms. I’ve not had it into the shop but once, and in the last year have added some components that are worth the asking price of the whole system. I may boost it for sale here and on FB soon if my current sales lead does not pan out.

But the deal, for the past month, has been to be proactive with regard to the logistics of the transition from old to new. It is not by any means straightforward, largely because of the rat’s nest of wiring that’s swathed in cobwebs and house dust (with Ladybug Sprinkles!)Â  behind an immovable solid-oak desk and sidepiece. Tthe two of them probably weighÂ  three hundred pounds and sit on a medium-pile rug. They are not sliding or shoving anywhere, even by an inch.

So I’ve spent a lot of time the past few days spelunking in the dark recesses to label each wire that will have a life and need to find a plug-in on the new machine. Many, thankfully, won’t have a life to come–like the multiple lines required for the MacPro monitor alone.

The new system will cost me every bit I earned over 2014 with book and note card sales, speaker’s fees and computer consulting home visits. But the iMac 5K 27 inch Retina (with beefed up RAM and HD) should last me possibly for the duration. We’ll see about that.

Over the weekend, I was cooing clucking around the place making the nursery ready for the new baby, and today is the Big Day. So now I’m just waiting for the UPS stork.

To be confident I had a good idea ahead of time that I wouldn’t have a Oh Crap moment lacking outlets, cables or other hardware, I created a diagram in LucidCharts. So I should be able to just plug it in right out of the box and be back in the saddle, and tomorrow, my first blog post on my last computer ever?

5 thoughts on “Oh What a Tangled Web”