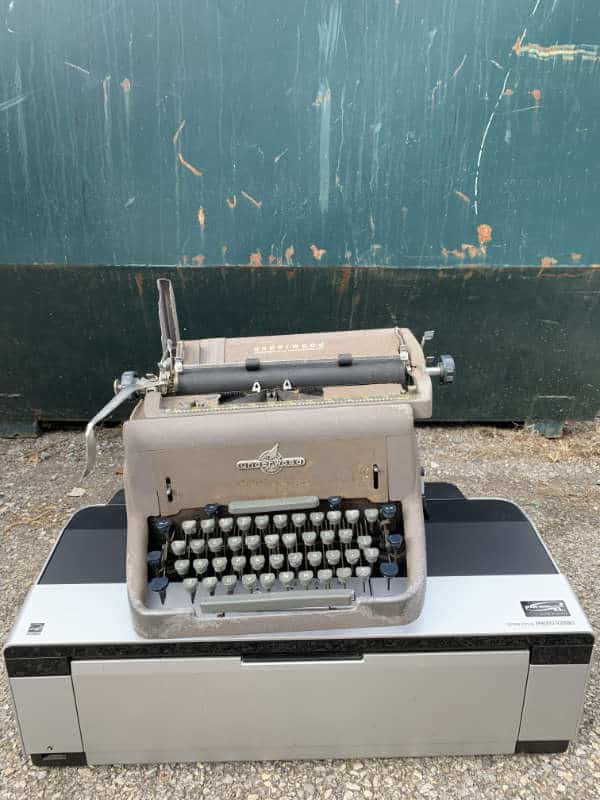 My morning pages sometimes get out of hand. What can I say? I’m hearing conversations with inanimate objects now. So lock me up.

They ended up, one atop the other, in the back of my car, both bound for the final resting place–unfortunately in the local landfill and not in a next home where each would have been appreciated by yet another human master. There were no takers, and so we’d come to this day, and it had to be done.

I pondered the moment, hat in hand. These two strangers had been distant relatives in life, by purpose, in the putting of ink to paper–a need that first met its application in the crudest form by spewed red ochre paint against a hand, pressed hard against the cold stone of a dark, flame-lit cave in the ancient past. I. Am. Here.

And that impulse to leave one’s mark ultimately and perhaps inevitably found easier and faster and better ways to say and show in words and pixels–harking back as I stood there musing, to my own early and current and largely underwhelming attempts to leave my own mark at Fragments from Floyd and elsewhere, in stories and images, day by day, personal and public.

And so I found myself eulogizing the two of them, there on the asphalt, anticipating the metallic echo when I unceremoniously tossed them into the empty metal grave, a dark cave where they would leave no mark at all. They were so different, even with their shared purpose–the one (a Remington Rand vintage 1930s that belonged to my wife’s father) and the other, an Epson 2880 Professional Color Printer from the twenty-teens, that had been mine. The two of them, in their mechanical simplicity or complexity, in their own ways were GORP extenders, enhancing the work of the good old reliable pencil. But I digress.

They were–these two tools–our slaves to do our bidding, we the masters with minds and hands and creative impulses to show or tell. Built for very specific service, they had no reason to exist, apart from the effective performance of that function. That work was the measure of their worth and justification for the continued presence of each of them taking up precious space in our home–until that fateful day.

The one, kept long after its work had been superseded by a younger upstart, its form and symbol and family history made it worth keeping unseen in the Very Back Room for the past twenty years. The other lived in a gleaming plastic cowling housing God only knows what arcane chips and circuits such that, when just ONE of them gives up the ghost, the malignant tool becomes useless with no aesthetic or historical point to its continued presence.

Both would soon become bits of flotsam in the strata of the Floyd County land fill. And yet, they had both taken up space or energy, had offered in their time the opportunity to say or show something from the personal life of their owners. I rarely simply toss such touched objects away, without them being remembered–if not celebrated–in some way.

The Remington, in its day, was a metallic marvel of miniaturized complexity compared to its earlier predecessors, starting in Mr. Gutenberg’s basement in 1450. The now-defunct 80-something-year-old typer was somewhat less portable than the pencil, it is true, but its marks were consistently legible and produced with lightning rapidity compared to writing by hand.

The dialogue between a writer’s mind and this machine was spare and direct; this was a slave that simply obeyed your fingers, one hammered letter at a time. There was no backtalk, no delays, no excuses. Only the occasional slap of the carriage return was required to bring ideas into a new paragraph, rewarded by the bell attesting to the machine’s obedience and compliance.

Turn the platen knob to add another page of white bond paper and finish the job. If a ribbon’s ink grew faint on the page, threading on a new spool was the most difficult intervention required to type all day, as long as your fingers could hammer the levers sufficiently hard and often. Dumb. Obedient. Human-powered. Just so many levers and pulleys you could rely on. It had never caused much human grief. But neither was it able to offer value or service and over it went, without malice or grief, into the dumpster.

I will admit to a combined joy-with-revenge as the Epson took its final plunge. A pox on all your kind!

Yes, it was in theory an extension of the creative mind that sought to reproduce in the mind of another the exact representation of light-on-object from a landscape or portrait or family memory. How hard could it be: send a micro-droplet of just the correct color ink to the exact spot on the canvas. Paint by numbers, in bits and bytes. And voila! A print suitable for framing. If only…

Unlike the Remington, the Epson always had its own ideas, and could not be rushed. Each intended print job was preceded by an unpredictably long clearing of the throat, by whirrs and chirps and wildly-ranging print heads back and forth. And back and forth. Until finally, it was ready for my command to PRINT.

No it wasn’t. In addition to the ON light another warning light invariably signaled disorder, disease or dementia. An alarm popped up over the Epson icon on the dock of the Mac. “Your ramfrangle is mis-aligned. Please spin around three times and try again.” You’re jerking my chain. I spin around as instructed. Take a few calming breaths. And try again to make one simple print.

The fat lady begins her guttural noise but never sings. “You must replace the YK112 light purple ink cartridge now.” I rummage through a hundred dollars worth of ink-by-epson and there is no such thing as light purple YK112. I go back to the printer dialogue. “Just kidding. Replace black, Jack.”

And finally, all seems well and third time’s charm: PRINT! I command. And with great fanfare and pomp the sheet of Epson Premier Glossy at last begins to disappear millimeter by millimeter into the machine. And it comes out into the tray a perfect unblemished WHITE.

So in on your demented, obstinate, rebellious, incompetent head, YOU! I sing at the sound of your carcass reverberating in the Green Grave. And then and there I determine that, when I get home, I will seek out a handful of yellow Number 2’s and the long-neglected pencil sharpener and live happily every after.

[The Curious Evolution of the Typewriter, in Pictures](https://io9.gizmodo.com/the-curious-evolution-of-the-typewriter-in-pictures-509985235)

[Instructions for the Operation and Care of Remington Portables, 1936](http://machinesoflovinggrace.com/manuals/manual-1936RemingtonPortables.pdf)

4 thoughts on “The Agonies of Ink to Paper”