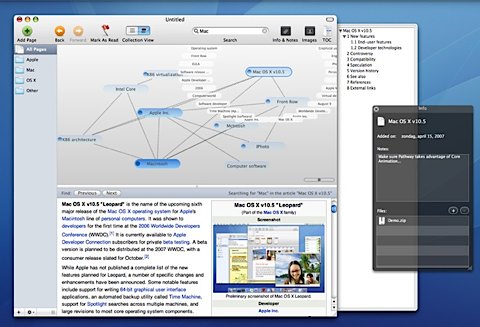 The links and alerts come in as I boot up (with the Mac, simply move the mouse to instantly wake up) the computer, stumble through the dark for coffee and come back to a page of rabbit trails. Most are deleted straightway, but some are tantalizingly interesting, followed, and soon I’m not any place I’d intended or needed to be in a day’s work. I generally allow myself some of this free-form browsing guilt-free first thing and as reward for real work later on–tossaway moments that don’t really count.

This is a longwinded way of telling you this morning’s free time found a possible keeper called Pathway (sorry, Mac only) that is both interesting and potentially helpful in its own right (as a Wikipedia links visualizer as you see in the screenshot) and as a model for ways the future web can be organized in research so that, in pursuing a topic, one keeps sight of the relationship between where they are and where they have been.

Ah but wait: a simple click on the Science pod from the displayed Wikipedia home page on Pathway brings up an image of some science fiction looking construction that turns out to be REAL: the Falkirk Wheel. Amazing! And off I plunge, second cup of coffee, blissfully following my nose.

Hmmm. Now I’m rethinking online research–AGAIN–so have two divergent trails to follow from the morning’s freeform time: I downloaded DevonAgent for review to complement Devonthink I already have. And I will take another look at Zotero, a free Firefox plug-in created by researchers (at George Mason U just up the road) for researchers. If you haven’t seen this one, take a look at the video. It’s an impressive package I rejected a year ago because I had OneNote. Now I don’t.

Meanwhile, I remember I have more bug pix to show you, some on the pocket camera and some on the Nikon card. For later today…