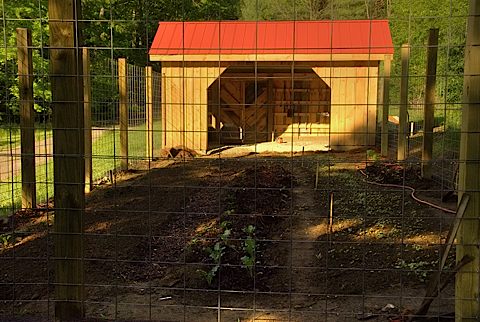 Today I think I’ll take the metal thermometer that sits on my desk (I found this particular thermometer stuck in the sand on the banks of the Black Warrior River in Alabama in 1965, but that’s another story) and stick it in the garden soil. Whatever temperature it tells me will be a few degrees below the soil temp it takes to bring about reliable seed germination. The garden is too cool yet and seeds are just sitting there.

In our zeal (and in spite of my insistence that it was too early yet) we put out peas, beans and corn at least a week ago.Â  Germination is very spotty, a sprout here and there, and I can’t dedicate our very limited space for empty stretches between the occasional future pea plant.

I’ll give it another week with the hope of warmer days and nights (for the garden’s sake, not the gardeners’. I’ve been quite happy with COOL!)Â  We’ve gotten good rain, but not enough heat–so far–which is why my rule in recent gardening years has been to not jump the gun (as she convinced me this year to do against my better judgement), to plant seed crops only after the first of June when the ground down in this deep valley warms up so seeds don’t rot.

I can say, however, that so far, we have not had any deer footprints in the garden soil, though somewhere in the green-shadowy forest, a young deer dreams of being the first to vault over the 8 foot fence and into Deer History (and our freezer.)