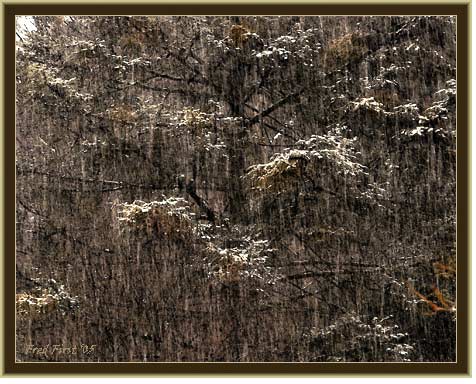 This is just right. Not too much, not too little. A snowfall that can stay where it fell until it melts later today, no shoveling, tire-spinning or cussing required.

Floyd County is in the donut hole this time, with considerable snow on the roads (according to VDOT–click Road Conditions button to see light blue (light) or dark blue (moderate) road conditions.) No color at all for Floyd County roads today, which means that, though our gravel road is covered, most paved county roads are navigable without problems up into just south of Christiansburg.

We got perhaps two inches here. It happened overnight, the wet snow coating every branch, twig and evergreen needle so that each tree type can be told at a distance by the way it holds snow. And this morning, holding my coffee cup, out the kitchen windows, it was what remains of the snow-covered hemlocks that held my attention and stirred memories, their now-almost-bare fans of needles holding less snow than when this species was not going to die out of our forests.

Here’s how I described a similar very personal reflection in February of 2005, with this imageÂ of hemlock to illustrate:

Idiosyncrasy: A physiological or temperamental peculiarity. Quirkiness or eccentricity. An unusual individual reaction to life events, things, or ideas.

I don’t feel that I have to hide my idiosyncrasies here–my peculiar way of seeing. These oddities are the traits and habits and points of view that distinguish me from you, and you and me from the common denominator core of human sameness and make us part of it as well.

Finding your voice is about coming to peaceful acceptance with those things in you that seem larger or deeper to you than to most everyone else. You will be misunderstood or ignored by many, but your visions will resonate with a few who see at least some of the invisible angels and truths that you do.

I show my eccentricities by the subjects of the pictures I post here. Because I have been struck by a certain light or pattern in the pasture grass or an eddy of the creek, I bring the image home. The subject and its light or color has meaning for me, and I know that not everyone will see in it what I saw. Not everyone will approve of how I’ve displayed it, what I’ve said about it or explained it. A few will. And that resonance with the few is amazing to me.

Yesterday: snow falls against the dark hillside. I set up the tripod on the front porch because that is where I could go without changing out of my slippers. The hemlocks on the ridge are dying: that this makes me sick with sadness is one of my odd sensitivities, I suppose. Yet here is one that still has needles enough to hold snow. See the regular, graceful way they hold their dark arms just so? And snow falls flake by flake, in such depth of distance, so matter-of-factly, each crystal a creature of its own predictable unpredictability of form and beauty.