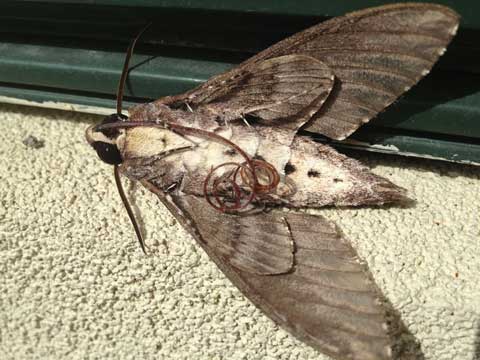 Tomorrow, he said. Tomorrow, he’ll get back into the routine. Tomorrow will be the beginning of the chapter that ends with the first snow, the first travel interrupted, winter. But not today.

Today, another session with the ink quill, and some kind of finished drawing when we’re done.

Tomorrow, maybe time for a longer blog post (I know–there are so many of you desperate for distraction, for one more place to flit your browser, sipping quickly from a distance, like a moth on the wing, hovering, too busy to light and tarry any place–no matter how substantial–for very long. I’m right there with you.)

Today as I quickly stick my head in the almost-deserted Fragments press room (where has my staff gotten to NOW?) I find two related bits that are held together by their simple causes and their big effects. I think there might be a moral in here somewhere, but I’ll be out of Goose Creek Ravine and off slaying dragons before I can pull that thread.

First, we have an entire ocean repopulated by a most terrible, no-good, really bad invasive fish called the Atlantic Lion Fish. The entire ocean’s teeming population has been traced genetically to a half dozen that were released by an ignorant pet owner who could no longer be inconvenienced by these toxic pets, so he threw them out his window, like a McDonalds Happy Meal box, and went blindly on his merry way.

And also in our tiny-to-huge department, earlier this year, Tepco lost power to cool spent uranium fuel rods at the plant after a rat shorted wiring at the plant. And from that, another ocean disaster.

Do you have other examples of small cause to large effect?

CAPTION: Â A fallen hawk moth that died with its proboscis extended–a flexible coiled sipping tube that could be uncoiled to at least twice the length of the creature’s body.

1 thought on “A little Goes a Long Way”