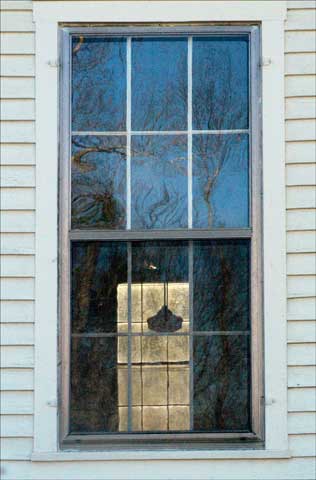 I realize now, as if it mattered, that a better title for this short series of church images would have been “Amazing Grace”, but it is what it is.

This shot, like yesterday’s, is not mine. Not exactly. I took it, but not with my camera. The camera was on short-term loan from Doug Thompson. He has probably forgotten, but I haven’t.

It must have been early spring, 2004–a few months before I got my own camera–my first DSLR, the Nikon D70–capable of providing images suitable for publication. The assignment: to provide pictures of the gravestones and the church attended once upon a time by the Mabrys that the Parkway mill is named after.

The destination for the images: Blue Ridge Country Magazine, and a piece by Elizabeth Hunter on the history of the mill and the folks who operated it back when. An interview with a Meadows old-timer got a sidebar piece to the main article.

My little 2 megapixel Nikon Coolpix 925 was not up to the task. The deadline loomed. I set off with Doug’s DSLR to get the shots we needed and get them in to BRCM before deadline. This image of the church window was one of them, taken at the Concord Primitive Baptist Church, near Meadows of Dan, Virginia. This is where the Mabrys went to church, probably walking from their home a mile or so away.

I like the lines of this image–like the congregation, manifesting the horizontal lines of life on earth, and the vertical hope of things above.