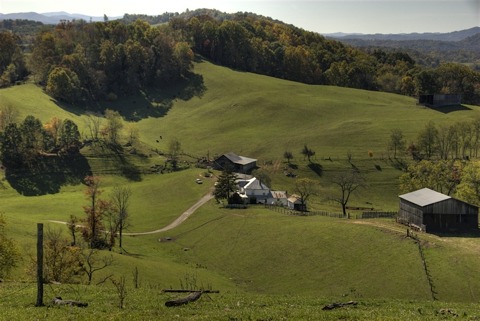 No, it isn’t West Virginia but Southwest Virginia. This is Grayson County whose southern border is the North Carolina line.

The county contains the highest peak in the Commonwealth, Mt. Rogers, and that might be it in the far distance, upper left. What you can’t see here (but I will show you soon) is the New River that completely wraps around this high promentory of land, itself worn smooth like a river stone, plush-carpeted in eastern deciduous greenery.

I’ll have images to show you of the river from high above, from the river-at-my-feet, and of the people who own and care for–and I mean care for–this place on earth.

You’ll hear how this part of the county is becoming a model of earth-care and stewardship that will insure the land remains in a condition both of best use and best preservation.

I went along for this visit on October 13, a journey that seems much more like participating in a story than an assignment.

I’m working on several more posts from SEJ out of my notes and have not even dipped into stories and topics from the bag of pick-up items or videos on CD offered at vendor tables during the five days of conference.

Also, I know there will be audio and video from each conference session. I’m not sure it will be publicly accessible–I hope it will–so I’ll be digging into that resource as I’m able and will be highlighting those for your edification. If you don’t wanna be edified, well, that’s another deal.

I’m heading back to the House of Pain today, putting back on my Physical Therapist hat. I feel like Cinderella. Fetch me the bucket and mop, the Grand Ball and Pumpkin Coach were something else, now back to real life as we know it.