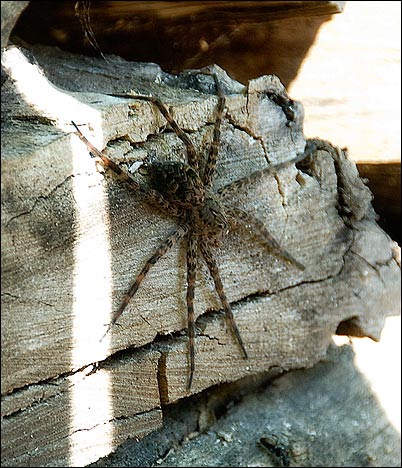 It was cool enough Monday morning that I decided I’d come in and have another cup of coffee, as much for the warming of my hands as for the chemistry of caffeine. I don’t know what exactly made me glance over toward the woodpile except perhaps the brilliance of the first rays of sun just then spilling over the top of the house. Ah spring! AHHH!

I don’t get freaked by spiders. This one freaked me.

This particular wolf spider had a leg-span the size of my hand, body the size and thickness of my thumb. I kid you not. And so I forgot the coffee, found my camera, and because the air was still cool and the spider sluggish, I was able to creep up close enough for a couple of shots.

He (she?) was still there an hour later when I came back out, but when I moved within ten feet of where I had snapped this picture, the spider zipped back into the woodpile, fully warmed by the same sun I was by then enjoying on my way back down to the garden for another round of puttering.