It is common knowledge that Labradors love the water. These retrievers were bred to swim out into the waves and fetch fishing nets in the frigid waters of the North Atlantic (and were originally called Newfoundland Dogs). They have heavy insulating coats to keep them warm when wet, and even have webbing between their toes that makes them excellent swimmers.

Tsuga, our yellow lab pup, joined the family two months after Buster left us. On his second day here, I couldn’t wait to carry him down to the edge of the water knowing what joy it was going to be for him to discover that he would grow up a free-ranging dog on a place with two creeks right out his back door. What a lucky dog! 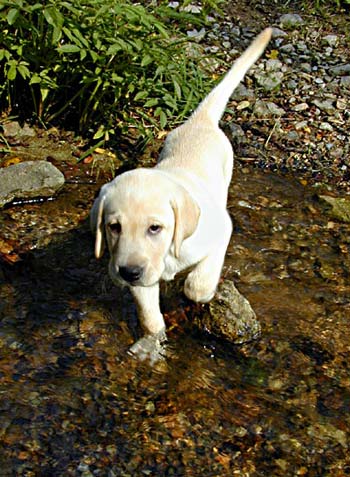 My excitement on his behalf was dashed when I discovered that he was not only not interested in the water, but was actually afraid of it! Maybe the fact that there was motion and noise set off his alarms; his nose offered no signals of friend or foe from this long undulating creature. In his short lifetime in this strange world, all the water he had ever known was mirror-still in a round plastic bowl.

But a week later and on his own terms, Tsuga was ready to get his feet wet. With a purpose, he hopped off the end of the foot bridge by the house this morning and headed straight to the shallow current of the branch. It was as if this was something he had finally mustered the courage to do, and must do quickly before his fear could talk him out of it. Into the trickle he jumped with all four paws and attacked the muddy bottom, sending up a spray of black muck. In a matter of a minute, for the first time but certainly not the last, he became a mostly chocolate yellow lab. The pride of accomplishment beamed from his muddy face, a face like a child making mud pies, proud to be really dirty-like a grown-up working dog. Now he needed a bath in the creek for sure, but I would let him decide if he wanted to face the bigger waters today.

I sat at the edge of Goose Creek near the barn while young Tsuga explored in the high rushes and grasses by the stream. He came cautiously to the brink and put his paws just barely in the current with comical ambivalence, pushed ahead by curiosity and genetics, held back by a native fear of the unknown. What was this motion and flash of water all about? And why did he feel so drawn to it now, as if he had been there before? In the end, his drive to explore won out; he pounced with all four webbed feet into two inches of cold, flowing water. To my surprise, he flopped down on his pink tummy in the stream for a few brief seconds. And in two shakes of a puppy dog tail, out of the water he tore at a rip, heading for the safety of the house.

He stopped. You could almost see it happening. “Wait a minute. I’m wet, a little cooler, but I’m okay! I’m safe! And that was fun!” So he circled back to me, and lay there on the cool gravel, in the shade of the crook of my legs. The cosmic consciousness of all Labradors had found him, heart racing, chin down on his paws. Then, creeping on his belly, he approached the water’s edge, and in he plunged once more, running around wildly in the widest part of the stream. Again and again with growing confidence he tested the waters, and each time, he returned to me for sanctuary.

It was the funniest, dearest-doggiest thing I had seen since Buster left us less so recently, and I laughed until I cried. This is not a figure of speech. I cried: for the beauty of that moment, for the pure goodness of the sunshine; for crows and ravens and goldfinches all around on a clear, crisp autumn day. The tears were for the innocence of a young life that I was allowing to fill the place of one I still remembered and missed so much. Tears were for the rightness and goodness of this new bonding with another intelligent spirit and for the transience of it all. There is a gift in these rare moments that is beyond words and overwhelming. Thank you, little buddy, I needed that.

8 thoughts on “Alpha Male Bonding: a look back”