↓ Skip to Main Content
Home › HomeAndHearth › Be It Ever So Jumbled

Be It Ever So Jumbled 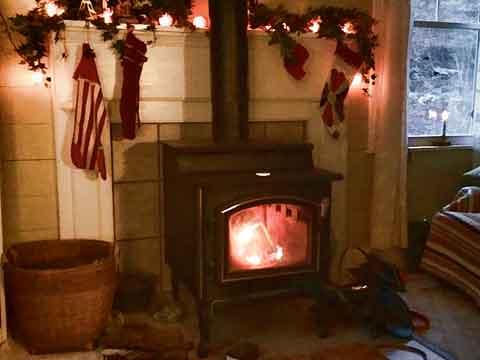 We are not knocking ourselves out decorating this year–as if we ever have. But this year, we’ve set the bar low– and deserve an award for seasonal lethargy. Yes, we have a tree, but it’s the Charlie Brownest ever. And this mantle “display” is about as fancy as we’re going to get this time around. It’s a low-ebb Christmas, and that’s okay.

This image showed up by surprise just now among my Camera Roll shots on iPhoto. It was taken last week as a test of an iPhone camera app to see how it might work in poorly-light situations–like this one, inside a room at dusk on a rainy afternoon. It was not intended for any other purpose. But I probably will not erase it because it captures the WYSIWYG nature of our unadorned country lifestyle in winter.

The stockings are hung by the chimney but without much care, limp and empty. We go through the motions, even without the hope of small children on December 25. And we’ve stopping knocking ourselves out to collect trinkets from the Dollar Store just to have volume in the toes of our respective his and hers stockings.Â  I forget which is which.

The foliage on the mantel is fake, sparing us the shedding of spruce needles during the first day after an hour of looking and smelling really, really nice before being baked brittle by the heat of the woodstove. The lights are plug-in pine-cone-y things we’ve had for a decade. And taken with the cheery orange glow of the woodstove, they manage to csat some cheer on the dismals of December.

The Quadrafire, burning 24/7 now for two months, is at home amongst its paraphernalia–the wicker kindling basket, the gold-handled poker that rests on the ash lip, the forty-year-old stove top thermometer It usually reads around 500 degrees this time of year. And there’s the leather wood tote on the hearth whose handle-loop is visible in the last rays from the window where Ann’s dark-triggered battery-powered candle has already told us the light outside is fading fast.

But the days are getting longer!

4 Comments on “Be It Ever So Jumbled”