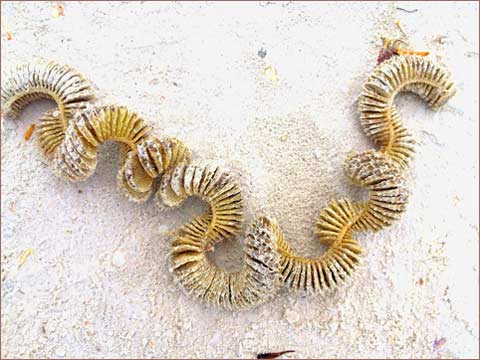 Actually, when I saw this “beach slinky” I knew that I once knew what it was.

My first stab was “stingray egg case” but then I remembered those are pointy-cornered leathery pouches.

It took some memory dredging to reach the real match: this three foot strand is a whelk egg case. Each segment along the cartilaginous string would have contained a number of tiny whelks–the familiar seashells that carry the sound of the ocean when you hold them up to your ear.

Some call this odd thing a “mermaid’s necklace.” Given that a whelk is not that large, I imagine it must take some while to “lay” this strand, all the while attached at one end to the whelk. When finally released, she buries one end of it or otherwise attaches it to a substrate so it doesn’t wash ashore until the young have “hatched.”

I’d forgotten that these mollusks are edible. I’ve never eaten whelk. And through the years they have had numerous other practical uses–in jewelry, as tools, and filled with whale oil, as beach lamps.

Most whelks around the globe are “right handed.” The Gulf and Atlantic coast Lightning Whelk is left handed, and therefore considered Â sacred and overseas, valuable as a trade item for its special twist.

Tomorrow, I’ll show you a “beach thing” I have not been successfulÂ identifying, and will recruit some help.