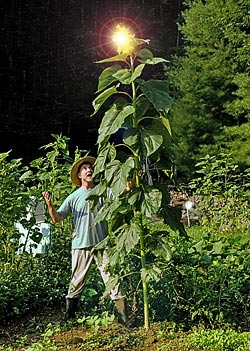 I’ve tried a half dozen times this morning to find a way to post something here without giving myself the dry heaves.

Maybe this 11th anniversary of Fragments this week represents a titer of blogging antibodies such that I am now in some kind of rejection of the tissue of my own words.

The surge protector sudden death yesterday on top of a power outage: I wanna die.

Talking about TEDx and some new software and aha! moments in the shower: get over yourself.

Is this what happens when your blog turns 11? You want to ralph at whatever trivia you attempt to regurgitate, an effort whose purpose totally eludes you? You feel foolish bearing your soul when most of your readers come your way from google searches for “how many meats are they in a turtle?”

It is put up or shut up time. After every plant and insect and season and family pet and domestic crisis and garden vegetable and hyperlocal drama and civic event and digital discovery and environmental problem and solution has become the dead kicked horse of Fragments from Floyd, where does a blogger go that would make anyone want to follow?

Sometimes I think maybe that Strange Farmer of ErewhonÂ (a Fragments-allegory from July 2002) really is mad, after all, and his wife was right.

“Friends I have never met will come”, said the farmer without certainty. “Strangers will come who did not know that they wanted to know about these things that they see here until they have seen them. In seeing them, they will see into me and trust me, and we will share the deep things of our hearts with each other, me and my visitors.”

The old fool is off to the garden now, to wait and see who will come, knowing they will seldom stop and rarely glance his way at all any more. But what else is he going to do, because after 11 years, if he stopped laying these shiny things before his potential visitors, he would simply disappear into thin air. Of this, he is certain.