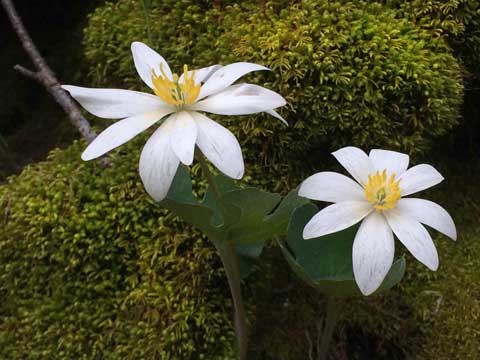 Bloodroot is one of the first to bloom among the spring wildflowers that emerge in April along our walking path. It appears too in patches on the way to the hardtop. And yet I have few images of it that do it justice.

I was whining about the fact that almost always, this lovely plant grows up through the visual clutter of leaf litter. No matter how showy the flower is, the background is busy and plain in shades of gray and brown.

No sooner had I offered my lament than I spotted these two specimens growing out of an expanse of moss right at eye level on the road bank above the pasture. CLICK to view larger image.

And as I worked on the image back at the house, I thought (from some far recess of an increasingly overstuffed mind) that I remembered this was one of the plants (like trillium) that offered seeds with tasty bits attractive for ants.

And yes, not only bloodroot but most of the early spring plants we see along our walk have this ant-attracting tactic. The phenomenon is called myrmecochory and the tasty bits you can easily see (google images link here) are called elaiosomes [literally “oil bodies.”]

Why have these earliest spring wildflowers (list below from a great piece in Eye on Nature) “discovered” this seed dispersal method and not later flowering plants? Because it works when ants are active and hungry, early in the season before they find their usual diet of dead insects and at a cold-ish time when there are not enough live and active insects like beetles available to do the work for the plants.

Other mentions or images of bloodroot at Fragments…

1 thought on “BloodRoot: Getting Antsy”