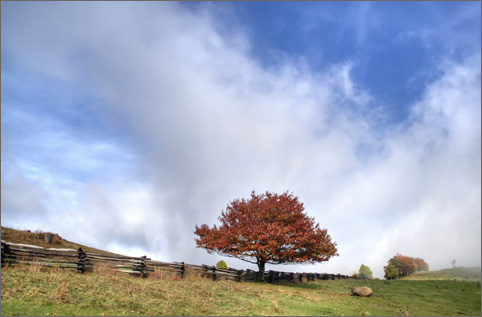 Soon, the leaf peepers will come. But perhaps, even more so that in past years, the IF, WHEN and WHERE of fall foliage remains to be revealed for the Fall of 2007.

What with the late frost that killed or surpressed leaf growth over a wide swath of the east–and higher elevations and deeper valleys especially–plus the off again-on again drought of the second half of summer, it’s going to be an unpredictable autumn leaf-peeping season.

And of a sudden, yesterday turned fall in Floyd–perfectly timed for the Taste of Floyd and Heritage Festival, though the poor folks who set up the tents Friday night in the dark, the rain and the wind have my sympathies. And while the skies were crystal blue yesterday for the event, the wind was no friend. I told somebody that “anything with a higher center of gravity and more wind exposure than a man hole cover is GOING to blow over today!”

And I will learn–if I ever do this kind of book table again (I’m thinking NOT) I’ll carry ROCKS FROM HOME, bungee cords, and a lot more masking tape. The booth next to me blew over entirely, while it was only my note cards and books and bookmarks and poster I retrieved time and time again.

I met quite a few nice folks, including some who had read Fragments before finally relocating to Floyd, others who had read the book and some visiting Floyd from “off mountain” for the first time. It was altogether a nice day, but I don’t think I’ve ever been so wind-burned in my life!

The Blue Ridge Autumn note cards that many of you helped me chose are now with the printer in Wytheville. I’ll let you know when they arrive, especially for the half dozen or so who have already put your name on the list for one or more packs. And hey: be thinking about note cards as Christmas stocking stuffers, as part of gift sets (Slow Road Home plus a set of notecards for $20 plus shipping) and for writing those post-season thank-yous.

And a little extra: a video created from the notecard images (30 seconds) over on Nameless Creek blog.