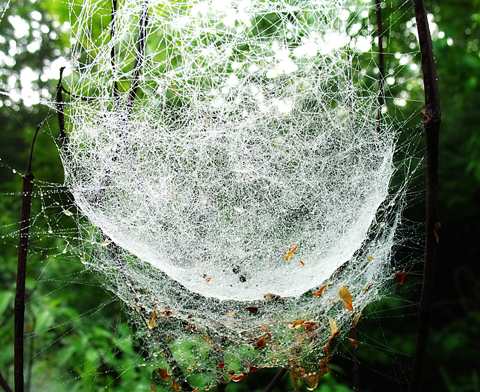 All these years here I had not bothered to name the tenants of these familiar distinctive webs but to call them “double decker” spiders, known far more by their product than their presence. They disappear as the camera lens gets close enough for a portrait of the landlord.

Somebody I was hiking with once called them “bunk bed” spider webs, and I kind of liked that, but was not able to run down the actual spider using that creative common name.

These webs obviously belong to the “sheet web” spider group (versus the spoke-line webs that are more familiar). And it turns out, the common name that is widely accepted for this particular sheet spider is the “bowl and doily” spider.

See it: the denser upper web is the rounded bowl sitting in the spider’s parlor on a lace doily. It is between these two webs that the spider’s hapless meals intrude before being had over for dinner.

These webs are rarely photogenic, being often under trees and horizontally situated. They catch every tiny fragment of detritus shed by the overstory and soon–even without the morning dew here–become quite visible with their burden of plant bits.