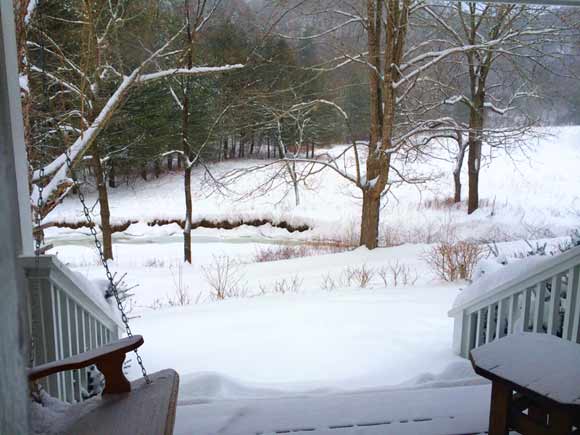 We will be suiting up momentarily to take our first steps into the snow. Neither one of us have boots high enough that the fine powder won’t pour down onto our socks. It is the cost of doing business.

And this morning’s business will be for the sake of an egg. That’s the measure of our poultry productivity these days from the two surviving hens. I may not have told you that a hawk ate the head of Goldie, Ann’s favorite, a few months back.

For that egg, we will spend hours today, first getting into the pen at all. I’ll have to lift the chain-link gate up off the hinge posts–if it’s not frozen in place–because there is no way to push the gate against both the snow that fell (14″ I’m guessing) and what has already slid off the barn roof (another foot or more.) You can identify the latter because it often carries with it some trace of the red roof paint.

We can’t simply shovel snow out of the pen. We have to pile it in a plastic sled and pull it out, one sled-full at a time.

The tarp is in some stage of disorder, we can see from here. If the grommets are pulled out, I will not be a happy camper. If it requires more extensive repairs than re-tieing the cords to the fence, it will have to wait for the better part of a week until this stuff melts. I would forgo chickens entirely, but don’t own enough stock to swing that decision. So next year, we will make other housing arrangements that do not require Rescue Squad activation.

That said, beyond the egg-certion this morning, there should be a few beautiful seasonal moments, and somewhere in a pocket several layers closer to my skin, my briefly ungloved hands will eventually find and extract my camera.

You’ll know it if that happens.

UPDATE: 9:15a Â Well that was a fool’s mission. But the fools accomplished it, gate off (but not back on) the hinges. And we all got home, stayed vertical and out of the creek, and did not exceed 90% of our age-related heart rate. At least not by much.