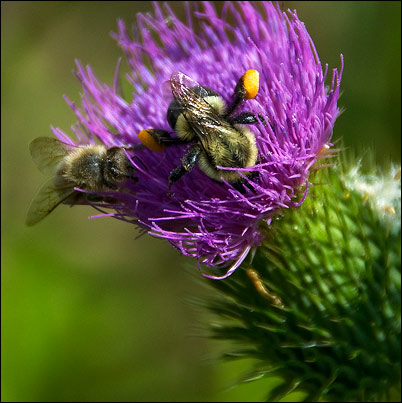 Today’s image: more insects and flowers. You were warned.

Good news: at this particular stand of assorted native plants, pollinators were abundant–especially, as I’m finding more and more commonly, the Bumblebees far outnumer the honeybees, though there were an encouraging number of the latter here the day this photo was taken.

You can see from the conspicuous orange stash in its “pollen buckets” that it’s been busy. I’m not sure that the second bee here is actually a honeybee though it is about the same size; its markings were different.

I didn’t realize that there are commercial bumblebee hives whose services are marketed to greenhouses for things like tomatos. I do know that if it were not for bumblebees in our garden, there would be precious few others to do the job.

And darned if wild bumblebees aren’t in jeopardy–from infection picked up by greenhouse bees. The parasite robs bees of their ability to distinguish between flowers that contain nectar and those that don’t, so an infected bumblebee revisits the same flower again and again and slowly starves to death.