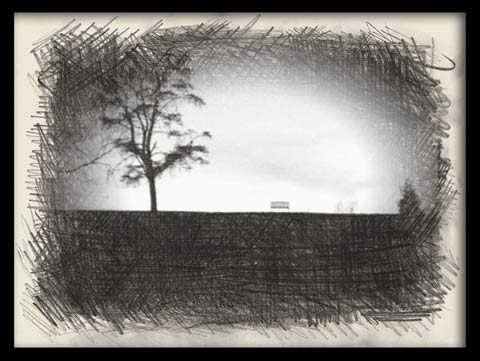 I’ve installed yet another camera app (My Sketch for iPhone), that, along with the paint-and-draw tools in my iPad (ProCreate, ArtRage, Adobe Ideas) keep making me come back to the question: when does art become nothing more than a technological trick accomplished by a five year old (or a 65 yr old for that matter) with a digital lens and the right software?

Some would challenge the notion that photography of any variety was art. And my tracing then “painting” my digital landscapes–my wife thinks that’s a cheap shot: sort of artsy but not the real McCoy.

I see her point, up to a point. But I am learning to see differently using these tools.

There is a skill involved here. I feel like this is something I can get better at–reproducing shadow, texture, the appearance of depth, realistic hues and free-hand shapes that are facsimiles of the painted object. But if I’m using something with a digital screen, she thinks automatically that makes it nothing more than a diversion.

What was the public response when the first camera lucida was used to “make art” of visual street scenes from European cities or to create portraits of famous people?

Wikipedia describes the tool as “an optical device used as a drawing aid by artists.” So there. And be aware of a controversial claim that many of the “old masters” of art actually used optical aides rather than free-hand drawing to produce their “masterpieces.” See Hockney-Falco Thesis

Still, that creative genius we have known for centuries as art, we have held a more or less common understanding of what it is. Now, anyone with a cell phone is an artist?

The same would go, I suppose, for digitally-produced music. And hold onto your hats: it won’t be long, I’m guessing, until you’ll be making three-dimensional artsy-objects with an inkjet printer. So right here in my office, I could create the Mona Lisa, the Brandenberg Concerto and Michelangelo’s David and not break a sweat.

But would they be art?