But There is Hope

fred Posted on May 20, 2013 Posted in PhotoImage, Reflections, The Writing Life 1 Comment 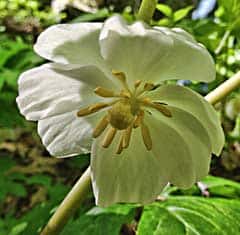 I’ll be meeting today with a group of retired folks, Methodists mostly, who will attend a retreat at Camp Altamons, a mere stone’s throw from home. My part is to share ways I’ve come to consider that we, and maybeÂ especially those longest among us with the most experience and wisdom–might reconcile broken relationships.Â

I learned in the summer of 1970, as a new zoology grad student, that many of the planet’s species and habitats–in fact, entire classes of animals and whole biomes–were under threat from our growing numbers and resource demands now referred to as our ecological footprint.Â

More than that, I became aware of an alarming indifference to nature’s grave condition, beyond the youth and some older academics of that day. It was as if the planet’s matter and energy were believed to be inexhaustible and her working systems too big to fail. I saw this as the most epic of conflicts in which I was a character, a story that would shape the state of the world that my unborn children would inherit.Â

Now four decades of biology-watching later, limits and ecological boundaries continue to be ignored–often in the name of profit and power. I have come to believe that reconciling essential and broken relationships–to nature, to place and within our human and non-human communities–must be the chief focus of our energies if we are to leave a legacy of hope and healing for those who come after us.Â

But there is hope. Our nature apathy and ignorance can be reversed by renaturing our selves and our children, defeating “nature deficit” and its physical and spiritual consequences. Placelessness may be reversed by a renewed discovery of “sense of place.” In so doing, as Eudora Welty said, “one place understood helps us know all places better.” Out of these therapeutic responses may finally evolve eco-empathy–a personal, ecological, stewardship ethic. With that understanding, we might then come to use our technologies and guide our economic engines with a seven-generation view of their consequences. If we are successful, mankind may yet foster resilience and balance on a planet whose health our well-being will continue to depend.