Tsuga was born near Allisonia about an hour’s drive from here. He came into the world a little more than a week before Buster left it. He is the dog we swore we could never have again, the pain of losing our Black Beast just too hard to ever repeat.

By the middle of July, we’d softened. Word reached us of a litter of 10. We drove to see them. They were numbered with a magic marker, odds males (of course) and evens were females. Our dog was the second largest, the most curious and friendly. 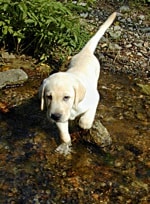 On August 17 when he was seven weeks old, we brought him to this two story dog house. He is turning six today, probably at least half way through his life. Chances are, we’ll outlast him by a little.

I hope he’s been half as happy to be here as we’ve been happy (mostly) to have him.

Grand daughter Taryn, who was terrified of their small dog Mia when it first came to their house a few months, has quite gotten over that fear. She grabbed Tsuga’s large labrador head by the jaws and planted one on him. He loved it.