There have been July’s we would have been overjoyed to get a single inch of rain twice during the month. This is not one of those. On the 5th we’ve already exceeded the “normal” average for the month by a good bit.

We’ve had somewhere between six and seven inches just this week, and most of it came too fast. (Roanoke is 12″ over the norm for this time of year.)

And it came on top of soil already saturated. And in our topography, that means flash floods. We stood on the front porch and watched the edge of the creek creep closer to the road in front of the barn. A stone’s throw from the front steps, Goose Creek carved back the standing four foot wall of sand, soil and alluvial rock that has laid in this valley undisturbed for a thousand years.

Huge chunks of the bank fell into the roiling muddy water and disappeared. The low-frequency rumble of boulders tumbling unseen in the muddy water was felt as much as heard as they crashed against each other, propelled by the alarming force of so much water.

As we watched sheltered by the porch roof, mostly, from the driving rain–and seconds before my HandyCam began to record the scene–a good sized cherry fell from the pasture side, forming a bridge under which the runaway-train of coffee-colored water rushed towards Roanoke.

This was more water than we’ve seen in our 13 years here (most such storms seem to come in the dark) and it was, frankly, a little terrifying. We figured that, when it was over, we’d have road issues. We were right.

VDOT finally sent the Volvo road grader late yesterday, because their trucks couldn’t get across the second low water bridge to cut a downed large tree blocking the road in that direction. As of last night, the water level was still too high to risk Ann getting out of here that direction this morning (leaving at 530–twenty minutes from now. I’ll have to stop typing and get her to the hardtop the other direction. But…)

Going the Shawsville Pike direction, because VDOT was prohibited from clearing the tree trunks and piled-up flotsam from the creek from the January storm that took our road out in a major way, we had a repeat performance, though thankfully not quite as damaging.

I give you, for comparison purposes, Exhibit A–same exact condition of the dam creek back in January. 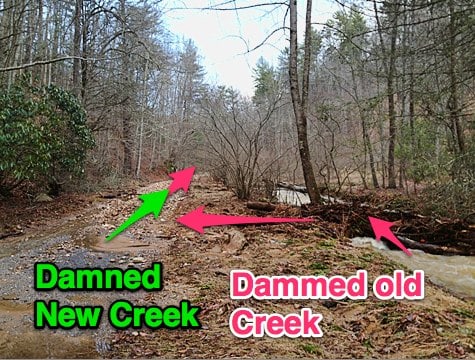 Seems there are some watershed or creek bed regulations that prevent even pragmatic prophylactic maintenance. I’m all for low intervention for natural bodies of water–up to the point where their conditions degrade the health, safety or livelihood of those who live and pay taxes in the area.

I’ll be calling this morning to give a piece of my mind to various federal agency answering machines.

Surely (he said) there’s a way to adjust the “standard interpretation” of whatever regulations are in place that, if unchanged, will continue to cause our road to become impassable in future storms (can you say HURRICANE SEASON?). Repairing this road damage is drop-dead simple and way cheaper than repeatedly patching rather than fixing the problem.

6:05 ~ I took Ann in the truck to her car, parked yesterday late at a neighbor’s, beyond the rubble field that once was our road. She called from Shawsville just now, and should make it fine from there. I’ll stay home and wait for the next domestic adventure. What a week!

5 thoughts on “Come Again Another Day”