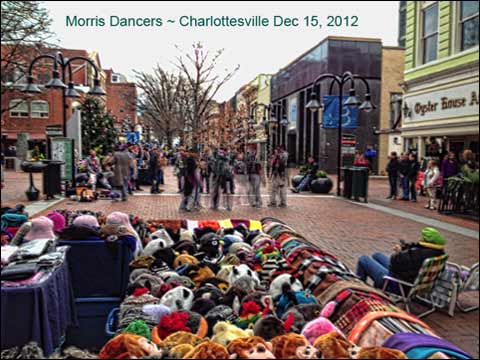 While it was not the springtime promenade it had been at the Festival of the Book when I attended in late March a few years back, there was plenty of colorful humanity in motion on the “mall” in downtown Charolottesville.

Somehow, when I first came upon the rag-clad, face-painted men dancing, prancing, cavorting and clacking wooden sticks together rhythmically, I knew it was “Morris Dancing.” I must have come across it before, but cannot find where I have written about it on Fragments. If I didn’t write about it on the blog, did it ever really happen? But that’s a question for another time.

I made a short video of this revelry, and maybe will get that up one of these days on YouTube.

“Morris” may have come from the term “Moresca.” The dance may have originally been performed back as far as the Middle Ages, with striking swords instead of relatively benign wooden staves. A rather exhaustive entry in Wikipedia describes the history of Morris dancing.Â [Click here for larger image.]