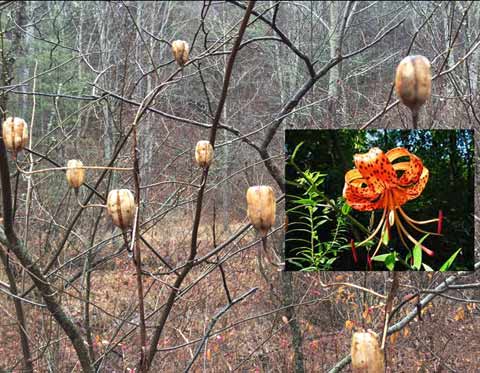 Consider the lily, how it grows. It toils not, neither does it spin. And yet Solomon in all his glory was not arrayed as one of these.

Something like that. It comes to mind after a misspent hour becoming anxious, angry and perplexed at the state of the world.

And yet, life goes on. I have to remember that. I should change my early morning habits, and not first thingÂ  check email, follow updates or read the news. I should put off such “spinning” until noon. Remember the lily. Think first on these things, and remember who and where I am. Yes, I’ll do that. Was that just a resolution?

SO here’s my natural world perplexity that centers on the familiar Turk’s Cap lily, Lilium superbum, that blooms in the middle of the summer and whose candelabra seed pods are evident in the late fall when all other green vegetation has died back.

The large orange flowers are distinctly suspended by a pedicel, a stem that hangs the flower upside down. ItsÂ  exerted anthers waggle on long filmanents below the recurved speckled petals. I have better images of the flowers but for the life of me cannot find them.Â  But take a look at a wide assortment of images via Google to see the plant in a better growing habit.

And here’s the deal–a new trick this old dog just observed this year after 15 previous years admiring these lovely wildflowers.

Take a look at the seed pods (much easier to see in a larger image I uploaded to Flickr) that are born UPRIGHT on the pedicel, which makes a sharp 90 degree bend just near the pod itself. See that?

So what this must mean is that after the flower has done its job of attracting hovering pollinators (moths?) and the plant bears fertile seeds, the flower stem twists or bends 180 degrees. The flower faces the ground; the seed pod faces the sky.

Is this right? Are there other flowering plants that do this? And what would be the advantage to holding the seeds upright in the pod vs dropping them directly as the pods mature ready to spread the seeds? Are seeds spread farther from the parent plant by a sway stalk than they would be by dropping into the growth zone of the competing parent?

So you see, there are more immediate, local and curious things to worry about that what the Republicans are going to do to the air we breathe.

Consider the lily, how it grows–from the Sermon on the Mount, just as fitting for the valley of Goose Creek.

4 thoughts on “Consider the Lily”