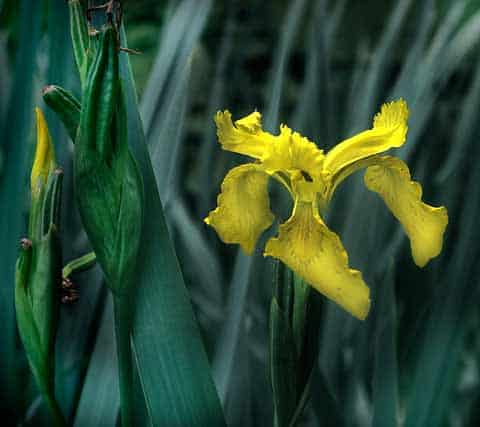 In our last expedition, we were anchored pretty close to our daughter’s house in a coastal suburb near Wilmington NC due to our child-care responsibilities. Every time we go down I say I’m breaking free to find the nearest coastal nature or wildlife preserve, but I have so far failed to put sandals on that notion.

So at least I would put my new Canon Powershot G7X through its paces, home-bound as I was, and with the unwelcome addition of a bout with subtropical depression. Her name was Ana.

Fliggers it shall henceforth be! Can also be used as an expletive.Â  You’re welcome. [Larger image is here.]

The challenges were many. This plant grew beyond the wire fence that actually runs down into the wetland waterway behind the house, so I could not get any closer than about five feet from this one surviving bloom among its spent siblings. The G7X max optical zoom is 100mm and that’s where this image was taken, as I recall.

The sky was forbiddingly dark and the frontal winds before the approaching storm where whipping these five foot tall leaves and flower stems such that at least a 500th second shutter speed was required, I thought.

Howver, EXIF data at Flickr shows ISO of 125 and shutter speed of 1/100th of a second. Granted, this image was cropped from the larger full image from this 20MP camera. Manual setting is turning out to be my go-to for fixed focus and lighting, as well as for action shots (of the grand daughter serving in a volleyball game earlier in the day.)

So I’m happy with the camera whose ergonomics fit my hands better than the Panasonic Lumix LX7 that my buddy Ed in Roanoke is now using mostly for its excellent macro function. Happy shooting, all!