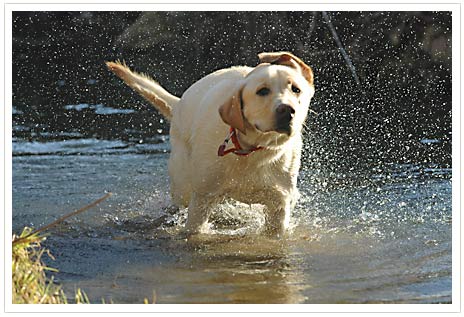 I can’t say we don’t have a pretty good idea what the dog got into. Might have been the deer carcass up behind the house or one of the raccoon mummies he found recently. Might have been all the butternuts he found in the grass and crunched on, shells and all. Or it might have been something unrelated to his lust for carrion and rock-hard nuts.

Whatever it was, he was the sickest we’ve ever seen him yesterday–fixated on eating grass, then throwing up, then eating more grass, drinking lots and lots of water, puking again.

By last night, he didn’t seem to have the strength to get up–even when offered the chance to go chase deer for his usual last walk before bedtime. His eyes were glassy, his nose dry and he didn’t wag his tail when we spoke his name.

Whatever it was, this morning, he seems to be back again. He’s been out twice already on the leash, no compulsion to eat grass, no heaving, and some tail wagging.

Good to have him happy and whole again.