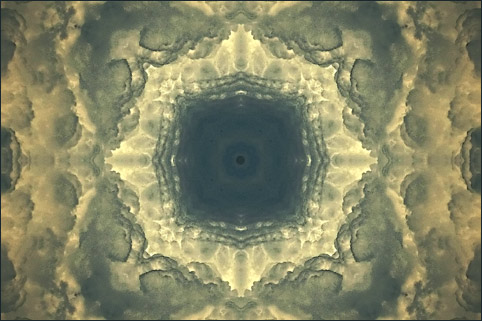 Â It’s addictive: taking nature shots and turning them into repeating patterns. The ordinary becomes extraordinary! It brings back memories of Christmas mornings long ago.

Do you remember the very first time you looked through the tube of a kaleidoscope? I do. It was utter magic. As you turned the end of the tube the pattern changedÂ  endlessly. It went on and on! No two views were ever the same.

Some of those simple visual toys (Christmas gifts more often that not) gave multiple reflections of the real world beyond; others showed patterns created from random bits of colored glass that tumbled at the end of the mirrored tube. I remember being absolutely mystified.

Things we see–I mean really SEE–for the first time often leave the most indelible impact on our memories and emotions.

“I remember the first time” she said as I passed her in the parking lot yesterday. “It was at recess in the third grade. We walked out the door and looked up and were delighted and horrified. God had written in the sky!”

It was the first time she or her classmates had ever seen jet contrails–long straight, surreal white streaks of cloud that could only have been writ so large by the Hand of God!

She and I stood there looking up at giant X’s and soft parallel tracks that marred the dark blue of the first day of December. Others stopped to join us, a funny band of Floydians enjoying God’s penmanship–no less wondrous an experience for knowing the pen was a jet engine.