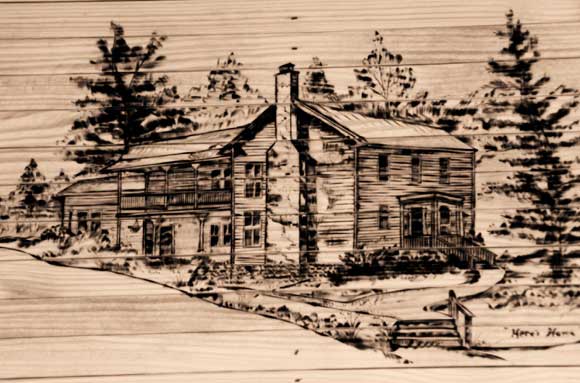 The year was 1999. When late December came, the reclaimed old house was wall-to-wall with boxes from our haphazard move from Walnut Knob; but we were finally under roof. It would not feel like home for months, but we belonged here, and we would settle in. It held such promise.

The contractors–who had been since May like visiting family that just wouldn’t leave–were finally gone for good, mostly. We got down to the business of living here.

But there were unaccustomed night noises; we faced the challenges of this unpredictable and treacherous road; and neighbors –all strangers–slowed down to gawk at the NEW old house that held the soft city folks who wouldn’t last here for even a year, the talk was.

The looming disaster ahead made those first awkward weeks on Goose Creek quite the drama. Yes, disaster. Y2K was upon us.

With its new paint and Currier and Ives quaintness, indoor plumbing and first-time light switches, the farmhouse was our Storm Home, we told each other. We would weather here whatever befell us with this falling apart–planes falling out of the sky, cars that wouldn’t start or would go dead in rush hour traffic; the end of “just-in-time” filling of grocery store shelves. Computers world-wide would shut down at midnight on New Years Day, 2000.

We were prepared–with artesian pressure on the well, and a faucet at the wellhead for filling buckets. I’d moved over a dozen truck-loads of wood from the Knob–at least a winter’s worth, not to mention all the deadfall here from the logging back in 1993. We’d burn for a half-dozen years off the collateral damage that uncareful loggers created for every one desirable white pine they took to the lumber yard.

Bad times may be upon us, it seemed. Here at last, we felt real security on this real estate. We quickly fell under a family provenance and peace unlike any of the other several moves during our married life. This place was where we had been moving all these years. We were putting down roots, finally, in our early fifties.

And might it be our children’s storm home–a place they could always come, and bring their own children? a place not of the fabric of the rest of the “real” world, a tranquil island in time?

Driving or flying here from their hurried city lives a few times a year at best, they would for those brief times enter a storybook version of reality. Over the river and through the woods….

This would become their ancestral home place, I imagined, a grounding in place for a gaggle of relateds not from any rooted place in particular. And when the founders were gone (that’d be me and Ann), other generations who perhaps carried some faint trace of the Hengen nose or the Dillon build would live, love and maybe even write from this same room where I sit this morning.

We knew it when we saw this place she insisted we would call HeresHome, that we would become something like the Krugers, moving in, sprucing up, making ready to welcome our storm child. Or storm grandchild.

But given the scripts that life deals us, this place will not, after all, become the page on which their future stories are written. Even so, that notion still resonates as a lie I knowingly tell myself. Our kids and theirs will at least have memories. Perhaps it is enough that we have passed through so many storms here ourselves, with more to come yet before we seek shelter at a less picturesque place of residence–if not truly home ever again like this.

We all need a storm home–or the fantasy of one–to flee to when the blizzards come. Garrison Keillor can tell you all about his storm home. If you don’t know this particular monologue, I highly recommend it to you, especially here at this family time of year.

I’ve linked the unlisted youtube audio from the page where I found it. Thanks to Kathy at Bereaved and Blessed for the good memories from this passage so familiar to Prairie Home fans like us. Our kids grew up with Garrison on Saturday nights, and this story is part of their legacy.

5 thoughts on “Finding Your Storm Home”