Flight of the Carpenter Bee 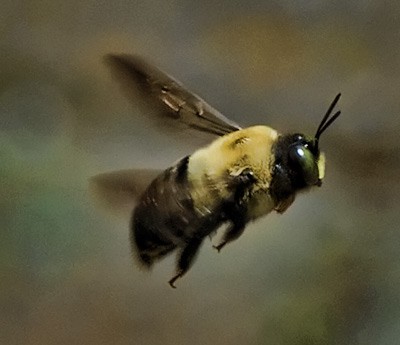 Maybe I’m crazy. I know there are times SHE thinks so, when so many chores must be done, and all of them call out to be done first. What does HE do?

Runs inside to grab his camera, on a quest: to see if he can get a shot of a carpenter bee in flight.

Ah, the misunderstood life of the eccentric arthropod-artiste!

The maleÂ  carpenter bees–the ones that hovered long enough in place patrolling their territories off the front steps–encouraged me to think I could set focus and wait for one to confront my lens in male aggression. Males do not sting; the females rarely do.

Just learned: some plants (like the passionflower a.k.a “maypop” are exclusively pollinated by carpenter bees, and with the demise of other bees, we’d best decoy them into unstructural timbers for their homes (instead of under my eaves) and keep them around.

“Many Old World carpenter bees have a special pouch-like structure on the inside of their first metasomal tergite called the acarinarium where certain species of mites (Dinogamasus spp.) reside as commensals. The exact nature of the relationship is not fully understood, though in other bees that carry mites, the mites are beneficial, feeding either on fungi in the nest, or on other, harmful mites.” http://en.wikipedia.org/wiki/Carpenter_bee

8 Comments on “Flight of the Carpenter Bee”