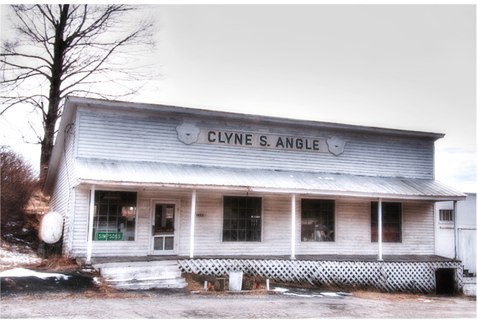 By the turn of the 20th century, Goose Creek was home to an established community of hardscrabble farmers, our level five acres being one of very few tillable plots in this deep cold valley. Watermelons were grown on nearby land so steep [Johnathan Lemuel Boone 200 acres from which our 80 were divided]Â that the ripening fruits had to be wedged in place by rocks to keep them from rolling down the hill.

Other well constructed old homes along Goose Creek no longer exist, with this one among just a few persisting structures from an era and community that once thrived here. Sadly, perhaps the most notable and well-documented of the older dwellings on Goose Creek [the original Boone property mentioned above]Â burned to the ground in the spring of 2011.

At one time, there was in this valley a three-story mill, a store (many still remember Roscoe Willis), a church (still standing but long abandoned), and a nearby mission house. This community was most directly connected to the farming community of Simpsons Â [Clyne Angle’s Store and Post Office]Â on Daniels Run [a road that apparently started at or continued from Rocky Mount into Floyd County, purportedly named after Daniel Boone]Â by a farm-to-store and postal road that originates on our property. Built by hand in the 1920s, as best I can figure, the old-timers still call it the “new road.”

NOTE: IMAGE–this store, still standing but abandoned for use, built in 1823, also served as the post office in Simpsons. The “new road” is the “pasture Road” that we walk numerous times every day. [I will have a good bit more to say about this, as it passes through my “fortress of solitude” at the back of the land.]Â I always imagine the other feet that have walked the same path–the lives they lead, the conversations they had as they walked to and from Simpsons or the schoolhouse. After we had first moved in here, an elderly gentleman stopped by to chat and gazed wistfully at the new road just behind the barn.

“I remember seeing my daddy ride a horse with two saddlebags full of mail up that road on his way to the post office in Simpsons.”

This is the last excerpt of a rough dictation on the topic of the roads in and near to where we live — their historical connection to the present. I will hope to incorporate most of this material and more on the subject into my book, a Floyd County Almanac.Â