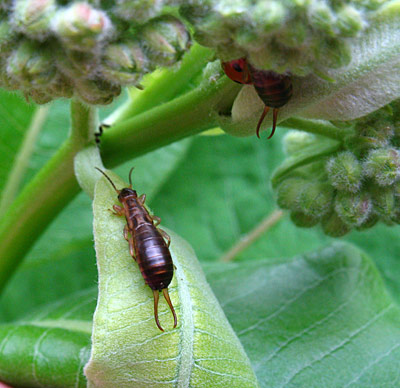 Ah, what’s in a name? In this case, more beauty to the ear perhaps than the named is to the eye.But contrary to a long history of misinformation, the earwig does NOT burrow into the ear of someone asleep and burrow into their brain. Hardly ever. Though I met someone in town yesterday who might have been a victim.

I tend to think of these creatures as “coffeewigs” because that’s often where I see them–around the sink, often under the coffee pot on first lifting it for the emergency cup of morning alertness.

Pictured here on the buds of some nearby milkweed, they do no harm. Their “pinchers” or cerci are rather puny, and though theoretically they can defend themselves with them, they aren’t much defense against a broom and a dustpan. (They do, however, emit a strong iodine odor if picked up and lifted to the nose.

What! You haven’t snorted an earwig? Well you certainly have lived a sheltered life!