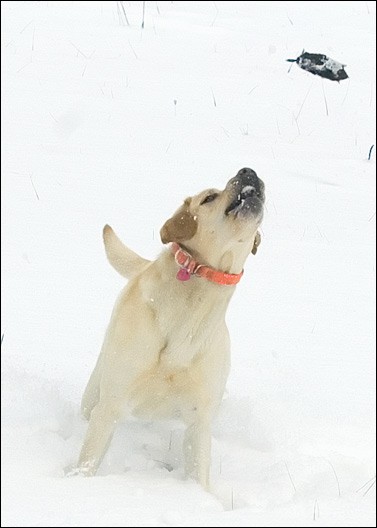 I’ve mentioned that my wife places an inordinately-high priority on allowing our dog freedom to roam. Part of my problem with that is that, while I more often stay home for all but 2-3 walks a day, she roams with him, and the two of them are often out of sight and out of earshot for long stretches of time.Â  Especially when there’s ice and snow on the ground as there is now, the possibility of unanticipated falls with injury goes up.Â  If she is around the bend as she is this morning, over the noise of the creek and the wind on the ridge, I wouldn’t be able to hear even the emergency whistle she carries in her pocket.

I don’t think she would consent to it, but I’m wondering about getting a simple set of walkie-talkies that would work over the distance that we usually walk on our land and up and down the road. I know it would make me feel better when I don’t see her back in the time frame I expect. It’s hard to get engaged in thinking or writing while wondering if she and/or the dog are under a fallen tree somewhere as dusk approaches.

Looking out the window just now, I see her coming back down the snow-covered pasture without the dog. No great surprise there. So while I’m having technological-communication dreams, maybe I should toss in a radio-telemetry tracking collar for the stupid dog, and just turn him loose when it’s not hunting season. But then…

Yesterday morning in all the ice, we had three small dogs (all with collars) show up outside the window–which drove Tsuga crazy and helped remove what little bit of floor finish we have left under those particular windows. I was not able to get close enough to look at their collars to know where they belonged. But even today, if we just let Tsuga out the back door, I expect he’d pick up the scent, and who knows how far that would carry him, and for how long?

I swear – between clucking along behind the chickens to make sure they have food and water and are either in or out of the pen depending on the dog’s state, and walking the dog on or off the leash, and all the visiting dogs and other animals we have tracking across the pasture day and night, the pace of our lives is pretty well dictated by our nonhuman neighbors.

And just this morning, and says she thinks we need a second dog–while it already feels to me like we’re being nibbled to death by mice.