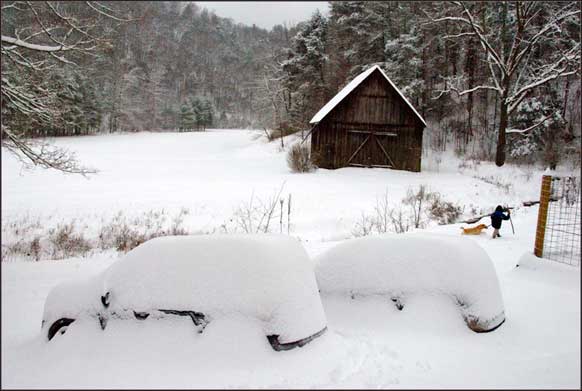 Today’s new word is cryoseism–foreign to southerners but quite familiar to our deeply-frozen northern neighbors as “frost quakes.” They can be quite unsettling if you don’t know your earthquake from your cryoseism. Like exploding tree-sap (which we might see this week) the soil can literally swell and crack when its cold enough.

There have been numerous reports of these unsettling but generally harmless nighttime explosive booms, and its not out of the question that the phenom might happen as far south as Floyd County. While, in truth, it’s not likely to happen in Virginia, I thought you needed to be prepared so as to not panic Monday night should the earth crack under your front yard.

And if the under-thunder doesn’t weird you out, “Some reports have indicated the presence of “distant flashing lights” before or during a cryoseism, possibly due toÂ electricalÂ changes when rocks are compressed.”Â wikipedia

The nocturnal cracking noise I am most concerned about on nights like the one to come is a pipe quake–that sickening wee-hours bang that portends trouble, not the least of which may be “I told you so” from you-know-who. I’m thankful to say we’ve never had this happen–at least not in this house.

When the Goose Creek house (built circa 1870) got its first indoor plumbing in 1999, the water lines were buried below frost line from the new well to the house. We won’t likely have pipes freezing underground. However…

The porous original foundation consisted of the house corners sitting on big rocks with smaller stones chinked in to cover–but no indoor plumbing then so no biggie.Â The new foundation is cinderblock with foundation vents that ARE all closed. (I double-checked yesterday.)

Even so, with wind chills many degrees below zero overnight, we’ll leave the faucets dripping Â tonight. You might want to think about it.Â Here’s why–from weather.com:

Letting a faucet drip during extreme cold weather can prevent a pipe from bursting. It’s not that a small flow of water prevents freezing; this helps, but water can freeze even with a slow flow.

Rather, opening a faucet will provide relief from the excessive pressure that builds between the faucet and the ice blockage when freezing occurs. If there is no excessive water pressure, there is no burst pipe, even if the water inside the pipe freezes.

A dripping faucet wastes some water, so only pipes vulnerable to freezing (ones that run through an unheated or unprotected space) should be left with the water flowing. The drip can be very slight. Even the slowest drip at normal pressure will provide pressure relief when needed.

Where both hot and cold lines serve a spigot, make sure each one contributes to the drip, since both are subjected to freezing. If the dripping stops, leave the faucet(s) open, since a pipe may have frozen and will still need pressure relief.

Ah, spring–by which time I hope to still have a bit of firewood left.

Explained:Â The Polar Vortex split that we have to thank for this week’s icy blast from the Arctic. Progressive warming of north polar regions (and soon an ice-free arctic) may make such southern excursions much more common in future winters. So while the planet overall shows an unmistakable warming trend, we can still have colder cold spells in northern-hemisphere winters.