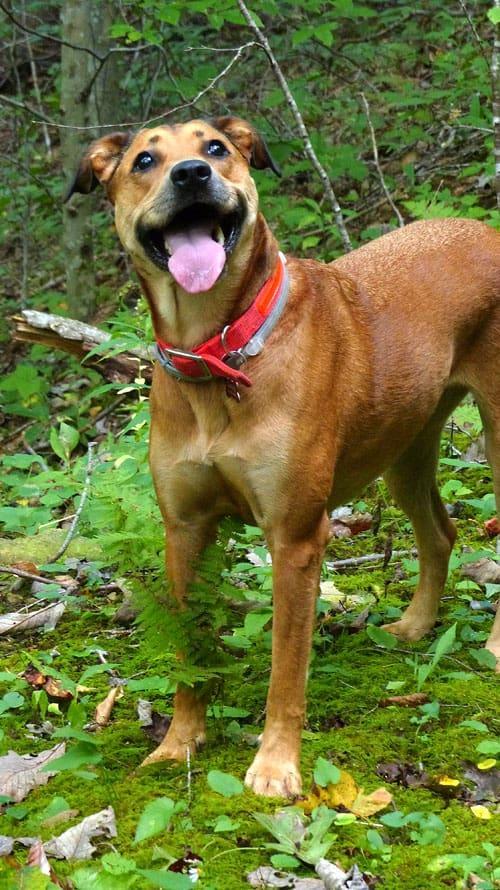 Gandy is gone as of an hour ago, after seven years and four months. That’s a lot of dog years, and they were good ones. She had an enchanted life on Goose Creek after being a rescue puppy that could have ended up anywhere, and in not such expansive wilderness with two creeks! Think trailer park tied to a tree.

Three days ago she was chasing squirrels on the ridge. Then she went into a rapid decline, and was having difficulty standing, breathing, moving. The end was near.Â We found a vet from FloydCo who makes house calls. She came right away. Gandy did not suffer.

She is buried out the kitchen window where we could never get a pear tree to grow. And that was one of the most difficult things we have done together in 47 years of marriage–in sickness and in health. We never buried a dog together before.

It will take some while before we stop expecting her to greet us in the morning and run ahead of us on the pasture loop. I just glanced up to see a copper colored flash go past the window and thought “there she is” but it was one of the red chickens.

It is a good exercise just now to think of our friends and family and those that knew us, and knew us with Gandy, through all the ups and downs; through the Feather years. Feather left the story a year ago January 23rd and Gandy never stopped missing her, I feel sure. Maybe there are dogs in heaven after all.

We never had a smarter companion, or more faithful or more helpful–bringing in wood, doing anything in the truck, she was involved in all family activities. And so her absence, all the more the loss.

And life goes on.

There are a lot of reasons why Gandy should be our LAST dog. But the “heart has reasons that reason does not know” Pascal said. And I expect he is on to something.