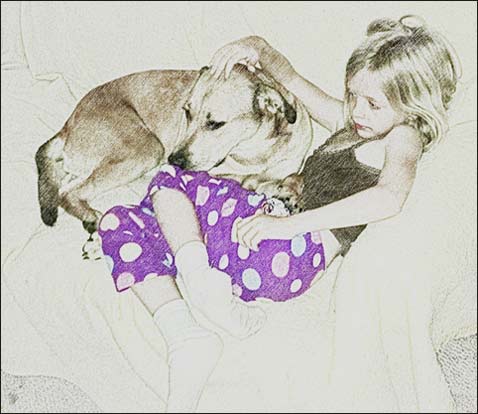 She simply walked up to the dinner table Tuesday night and stood there at my feet, waiting, as if to say “Why doesn’t this work anymore?”

After a full, normal, active (if not hyperactive) day around the domain, she should have been standing there for a pat on the head. Instead, she showed us her right back leg was injured. No whining, no fretting, just a statement of fact: she couldn’t stand on all four legs. That was the first time we were aware she had been injured; we still don’t know exactly when or how.

To make a long and ongoing story short, the best we can hope for is a very expensive report to tell us there are no orthopedic interventions required, but only keep her confined for a week or two (the horror!) and it will probably self-correct. After all, she was able to walk on it during the day yesterday, just not load it by running or jumping. Maybe it’s just a hip muscle bruise. Maybe…

She’s only two, and not overweight, so the kinds of hip issues seen in larger, older dogs seems less likely. The more probable outcome from my observations, when the vet examines her first thing this morning, is a knee injury. A torn ACL maybe.

So the wee hours were filled with scenarios of how human affairs will be reordered over the next day, days, nights and weeks. If next week’s demands were not such as they are, I’d have elected to give this a few days to see if she recovered on her own. We need more immediate and definitive answers, and there’s a weekend looming. So we left her last night and she’ll be first on the docket this morning before the day’s scheduled vet surgeries begin.

The way she flies up and down these hillsides with reckless abandon has been a vicarious joy for two old souls who do well to walk the level path. My greatest angst is the thought that she may have run her last victory lap around the pasture for a long, long time.

It’s a sad and deflating situation, as that dog’s impediments diminish her two human admirers more than they care to admit. She has been our representative of tireless, boundless victories over gravity. When she runs, we get belly rushes. You know what I mean? Will she be, from now on, leashed forever? We would feel her chains.

Image “art” by MySketch iPhone app from a photo by the blogger.