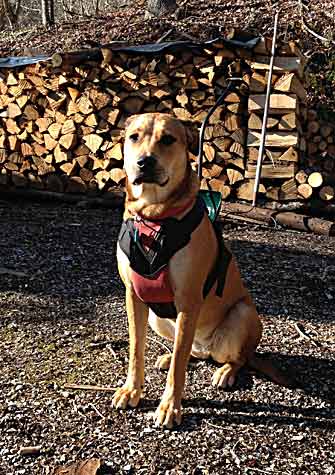 Since it’s been some while since I mentioned the evolution of our relationship with the DoTH (Dog of The House–the canine equivalent of PoTUS), I thought I would do so briefly this morning.

I couldn’t find any March 2012 blog references to the dog, I guess because by then some blog readers were telling me “enough about the dog already!” But her long-term residence here even at that point (we got her at 8 wks old in mid-December after Tsuga died on December 5) was still very much and very often in question.

A year ago March she was at risk for going back to the Humane Society from whence she came via rescue folks in Carroll County. Ann, at that point, was actually afraid that the dog might actually injure her with her too-aggressive playfulness,Â especially on the daily marches around the woods and fields.

My theory on that is that she (Gandy, not Ann) was not socialized long enough with her mother and litter mates, since she and her siblings were rescued at 5 wks, when somebody was giving them away for free out of the back of a pickup at WalMart in Galax. She had a troubled early-puppyhood.

Today, we’re awfully glad we stuck it out. She’s a fine companion. And assistant!

Yesterday I was dragging long tree branches to the pile along the edge of the pasture. All of a sudden, the load got lighter by a good bit, as if all the resistance of limbs against the rough pasture had disappeared. I turned around as I trudged forward, and there behind me, Gandy had picked up the trailing end off the ground and was actually pushing forward with it. I’ll have to confess that after that one seemingly-cooperative occasion, if I was going east with limbs dragging, Gandy pulled it west. But she was engaged in the work, and maybe that’s what matters to the self-esteem of a Rhodesian Ridgeback mongrel.

As much as we loved Tsuga, he was an aggravation with his constant running off to follow a scent. He’d be gone for an hour or more on a regular basis. How many times did one of us get in the car and drive up or down the road and find him with some disgusting remnant of a former creature in his mouth.

Gandy, being female maybe, being less driven by both smell and the promise of food, and being far more a follower than a leader, never lets us out of her sight. She is out of ours quite often, but a hoot or a whistle brings her flying to join us.

Those kind remarks being Â said, we got home last night to find a stuffed toy unstuffed all over the floor. That, by itself, is not so odd. The fact that this particular toy had, when we left the house, been in a bucket on the washing machine, now that’s a surprise. We can figure no other answer than the dog knew somehow that it was there (we regularly put Angels-in-the-Attic dog toys there) and she leapt up and fetched it. There were also shreds of dryer paper amongst the stuffing. Hmmmm.

CAPTION: Gandy waits patiently in her traveling harness, ready to go to Puppy Camp while we visit friends out of state.