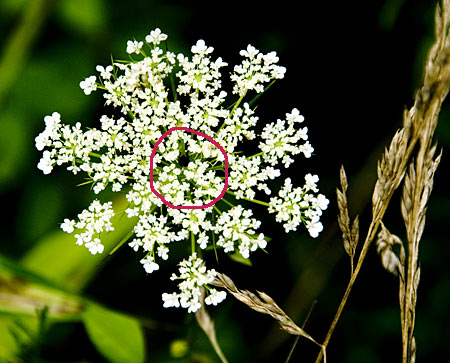 Some of you will remember a month or so ago when our six-year-old grand daughter, Abby, came to visit. She is like a sponge, soaking up the details of all the alien creatures and greenery she never sees on the South Dakota prairies back home. (She soaked up quite a bit of Goose Creek, too!)

And so her grandpappy did his best to enrich her time in woods and pasture by showing her little details that might interest her. Once, she highjacked this teacher-student relationship and showed me something new to science–a joke that, as most jokes do, requires a little background fact, then twists it in a new and unexpected way.

The image above is the very common Queen Anne’s Lace. On many of the flat-topped inflorescences, there is a central deep purple single flower. I don’t know that anyone knows why. (I once asked a very high authority in the botanical academic world why the dark central flower. “Heck if I know” was his disappointing answer.)

And so, I found such a flower and pointed it out to Abby. Then we did a little survey of the couple dozen plants nearby to see how many had and how many didn’t have the central dark flower. 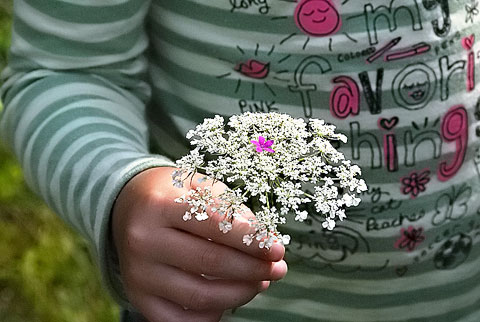 A few days later, Abby came running from the edge of the woods. “Look, Dumpa!” She had “found” a specimen new to science.

I was amazed. (And more than a little amused.) She’d plucked a tiny Deptford Pink and stuck it in the center of a Queen Anne’s Lace. She’d created a visual joke, and the two of us knew why it was funny–a shared twist on nature that made us both laugh.