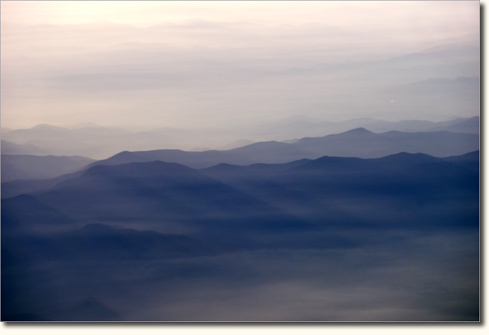 As usual on the (re-routed) return flight from Atlanta to Roanoke last week, I had the window seat. But the haze was such that there really wasn’t much to see after we lifted above the clouds and a faded Lake Lanier disappeared in the distance. I got out my book and pen and resumed adding exclamation points and scribbled circles to the book it’s taken me a month to finish.

I glanced up from my book a bit later to notice a pink sunlight that projected a porthole-circle of light against the seat in front of me. I leaned forward and turned to see if I could get my bearings from the terrain. Wow, would you look at that, I said to no one (Ann disregards my constant stream of topographic comments in such a case as this.)

Most certainly we were flying over piedmont with the escarpment of the Blue Ridge Mountains to our west-northwest. The sun was low enough it struck a glancing blow across the peaks and diffuse enough that there were secondary shafts and shadows as well, made visible by the haze and a low ground fog. It was so amazing that I didn’t even think of trying to take pictures for a few lost minutes.

Then “Grab my camera! Hurry!” I commanded with no patience whatsoever. And Ann scrambled out of her seatbelt and fumbled in the overhead compartment for my camera. I took a couple of dozen shots through the smudged, scratched porthole, hoping when I got home to be able to compare the shots to google earth locations probably 50 miles north or south of Asheville (Smokies to Grandfather Mountain) and figure what mountain ranges I was seeing. So far, no luck.

But a few of these shots just might enlarge nicely. They sure give me a thrill, and would love to have a couple hanging on our walls. More can be seen in a little gallery from our South Dakota trip last week.