fred Posted on May 5, 2008 Posted in Outdoors, PhotoImage 3 Comments 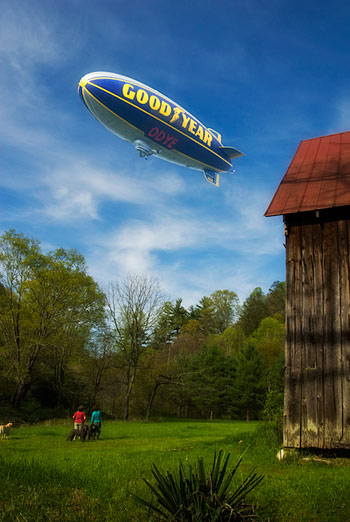 But of course we already knew that even earlier in the day of the afternoon on which this image (er, these images) were taken. Isn’t it considered good luck if the first thing you see in the morning is a bat in the room fluttering in your somnolent peripheral vision as you’re drinking your first cup of coffee? Said bat disappeared thereafter and could not be found. Read: Ann freaked.

Company (red shirt with two large poodles image foreground) walked in the house to visit yesterday afternoon and immediately the bat greeted her. Ann freaked. Bat cooperated by restricting itself to our bedroom. I returned a moment later, creature in dustpan. “How’d you get it?” she asked. Punnily I answered: “Batted it.” Stunned it with a broom and released it outdoors.

Garden shed roof goes on today, metal terra cotta pre-painted, should match the barn roof you see in the picture above. Spread about half of the donkey poo out of the back of the truck (thanks again, Ron! but oooh my back!) but was not able to crank the tiller to work it into the soil. I’ll make an emergency small engine consult to my neighbor this afternoon and hopefully have it looking like a ready plot by the weekend. 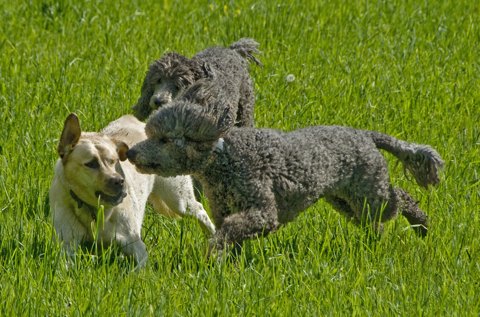 So you can see T-dog has met his match and then some–two 8 year old poodles came to play and they took no crap off the guy-dog. They actually bantered and taunted and chased and played coy and ran in the creek and had a grand time yesterday afternoon when a former co-worker of Ann’s brought Tsuga some playmates. Wore him out!

We stood at the edge of the pasture post-dogromp waiting for what sounded like a small and very slow plane to crest the treetops to the west. It seemed to be taking forever and I finally gave up watching. When I turned around the Goodyear Blimp (throwing its voice as often happens in these hollers) had appeared over the east ridge and quite freaked me out!

The combined image at the top of this post is 1) the blimp at 200mm spliced into 2) the scene at 50mm focal length–otherwise the blimp in the sky would have appeared about the size of one of the dogs on the ground. Sorry, couldn’t resist.

3 Comments on “GoodYear for Goose Creek”