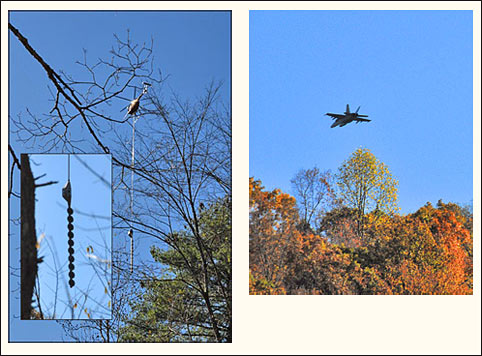 The AEP man stopped by the house to tell me the helicopter would be in the area over the next few days, trimming the power line right-of-way with the world’s largest chain saw, here at what he called “the end of the line.”Â  I heard the drone for hours that morning, unable from the ridge-bouncing echoes to figure exactly where the combination of craft and mega-saw was working at any given moment. Then suddenly late morning, the sky-tool rose and settled a couple hundred yards from the house to clear the line behind us.

As you can see in the inset, this enormous gizmo really consists of ten 2-foot circular blades somehow guided with more or less precision along the margins of the forest where it meets the clearingÂ  under the power lines. What keeps the whole thing from flailing wildly on hitting a knotty snag is quite beyond me. (Apparently, this kind of thing does occasionally happen: they disrupted our power for most of yesterday by this type of “accident”.)

Of course I had put my camera on the back porch, waiting, so that when the process came into view, I’d grab the Nikon and get a couple of pictures. And so I’m snapping away, fascinated by the nuanced expertise of the helicopter pilot, my mind focused on the image in the viewfinder, when a loud roar overhead makes me think at first that there is about to be a terrible crash.

I pulled away from the camera to comprehend the larger picture of what was happening, and out of the corner of my eye, a dark shape zipped past. By the time I turned the lens towards it, the source of the roar had almost disappeared over the east ridge of our valley.

Had I been expecting it and had the lens zoomed back to take in a larger field, I probably could have caught both helicopter and fighter jet in the same frame–and they would NOT have been separated by much vertical distance at all!

You see how low these things fly–we can smell jet fuel sometimes. In their practice run, these fighter pilot students fix on the NEXRAD tower just up on Coles Knob, and we get several passes a week, and they usually fly in pairs separated by 10-20 seconds. Actually we hear a lot of them, but by the time the sound reaches you, the aircraft is already screaming over the next county. I’m amazed I managed to turn and shoot fast enough.

Made me want to turn the lens up and blow away the smoke–like the old cowboy heroes after a Dodge City shootout.