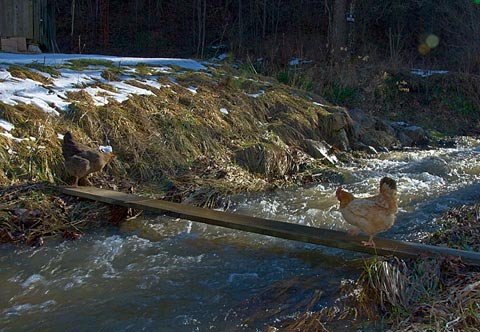 The latest challenge to country living (but not so much that as leaving it for town) met new obstacles this weekend with the floods.

There was not so much rain–maybe 2 inches–but it mostly came Sunday overnight and fell on frozen ground. Here in our valley, other than washing more of our gravel off the road and covering the low-water bridges, the only matter of concern was getting over to let the chickens out of their house in the morning. We pulled the plank the night before, and it was later Monday morning we were able to put it back down, but upstream 75 feet where the banks are a little higher.

By the time I took this picture, the water had fallen six inches and the hens had found the board-bridge and been back and forth several times so that they could, well, get to the other side. The south-facing hillside behind the garden has become a favorite scratching place and they have left no leaf undisturbed. Offered commercial laying mash or the chance to free-range, they rush past the metal feeder headed for the hills.

The folks on Griffith Creek were not so fortunate. The little tributary pretty much cuts at 90 degrees across the steep contour of the ridge that runs behind our house and continues to the notch that holds Shawsville Pike. On its way to merge with Goose Creek, the water cut a cleft in the road that I heard you could stand in and it would be more than head-high. VDOT patched it yesterday, but I doubt it was more than temporary. We expect Act II before a more permanent fix, which some of us out here will need–so we can get to the other side.