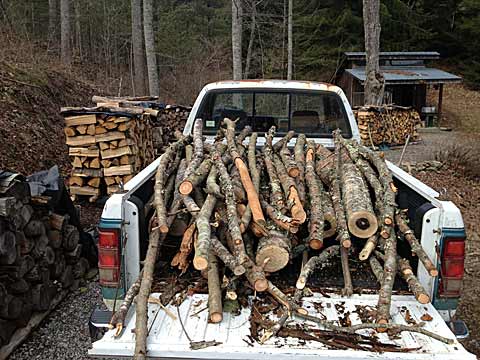 Yesterday, a good balance was struck between indoor and outdoor projects. Finally, an alignment of stars that put into the same day a bit of sunshine (with bitter winds, of course) AND a working chain saw.

Add to that concurrence a windfall, literally, from last month’s ice-and-wind event that brought down the weaker trees in both directions from the house.

Weaker trees hemlock and tree of heaven (Ailanthus), being less energy-rich for firewood, they both will be falling across our road for decades to come.

Hemlock is on its way out as a species, due to parasitism of the HWA, the Hemlock Wooly Adelgid, that is decimating one of my favorite trees across the eastern US.

Hemlock is a softwood, and pretty far down on the BTU per cord charts. There is the common dichotomy of opinion about its tendency to create creosote.

I burn a hot fire or otherwise would let hemlock burn rich, and our triple-wall pipe keeps stack temps hot. It does have a reputation for sparking and crackling, but with our glass door stove, that makes for enough entertainment to override its energy deficits.

Tree of Heaven, OTOH, is on its way in. As an invasive, there is very much of it along the Blue Ridge Parkway, but only one stand of it I know of down along Goose Creek. When the big hemlock fell across the road, it took out a couple (but not nearly enough) of the Ailanthus. I can’t even find its BTU content, but the tree’s name is generally spoken by wood burning folk with a certain degree of disgust or disdain.

Even so, like the old-timers say, the best kind of wood to burn is the wood you got plenty of.

CAPTION: The old Dodge Dakota Rustbucket (1995) that keeps on ticking. It has become one of Gandy’s favorite places to be. I have to pull her by the collar to get her out of it.

5 thoughts on “Got Wood, Coming and Going”