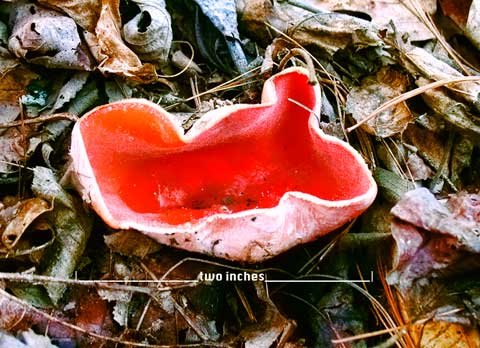 Ann came back from a walk having seen these scarlet cups (fungus) and the title of this post is the phrase that came to mind. I thought that had been my term on the blog one spring, as it is an apt descriptor of this first dash of color weeks before the bloodroot and coltsfoot appears.

But I can’t find that I’ve used the term on Fragments for this transient “bloom” of March. But did find it described this way at Wikipedia–desperate winter, indeed!

One field guide says “it is a welcome sight after a long, desperate winter and is the harbinger of a new year of mushrooming.” Common over much of the northern hemisphere, it occurs in eastern North America, in the midwest, in the valleys between the Pacific coast and the Sierras and Cascades, and in the Old World (Europe, Africa, Australia, and India). It is also found in China.